It has been brought to my attention from the highest of confidential sources that the whole of Canada is cringing with embarrassment.

Justin Trudeau, it seems, has been publically making a complete ass of himself.

No. It’s not his silly socks or his political correctness for all of peoplekind, but, rather, turning his week-long holiday to India into his own personal Bollywood movie. Supporting cast features his wife and three kids. The villain of the piece is a Sikh extremist/criminal who should have come to an official dinner but had to be uninvited. And the wardrobe department has outdone itself with trunks full of fancy wedding kurtas, sherwani and pointy-toed embroidered slippers.

For the first three days, Justin visited the tourist sites and spun cloth Ghandi-style while dressed as a traditional Indian bridegroom. It started funny, and got quickly annoying.

It would be as if he had arrived in Switzerland dressed in Swiss folk costume, with the kids as little Heidi and Peters and Sophie in a bust-popping Germanic dirndl. A goat might have been part of the entourage. 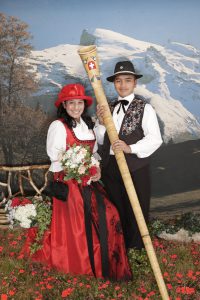 Several reasons have been offered for his misplaced display of cultural appropriation. Those with a soft-spot for him have suggested his first trip to India with his dad, Pierre Eliott Trudeau (who was Canadian Prime Minister from the 1960s into the 1980s) had something to do with it. The cynics say he was trying to play to the huge Indian population in Canada—especially the Sikh contingent. The jokers say he was purposefully attracting attention away from (and thereby annoying) Donald Trump.

I say that he is suffering from a serious case of dynasty disorder. Kids, wives and siblings should not try to follow the old man down the chutes of political power. There are bound to be mishaps. Looks at the Kennedys, the Nehru-Ghandis, the Bhuttos, the Clintons, the Castros, the Kims, the lePens. Nothing good ever comes of it.

(Timely Warning! Be very careful what you wish for, Caroline Mulroney (daughter of Brian).)

There is an up-side to all of these shenanigans, however, as our Little Potato’s political antics are bringing us all together again. It has been a long hard winter in Canada this year and the resulting cabin fever has produced serious outbreaks of family testiness and winter squabbles. All of this is blowing nicely away, as we follow Justin’s totally mortifying holiday from hell.

We wrap ourselves in our blankets of Canadian common sense and decency and know what it is to be a good tourist: You dress quietly and discreetly; you stay calm and clean; you indulge in self-depreciation and good humour; you stand patiently in line; you try to pay more and get less; and you tip as much as possible whenever you can.

Everybody knows that you never ever “go native” or bring your own chef with you to cook the local food.

And we thank goodness that Justin is back in Ottawa again and that spring is just around the corner.