Nobody ever actually tells you that you’re going to be flying into one of the world’s most dangerous airports. However, if your local low-cost carrier sells you a ticket for a seven-hour round trip out of Geneva for 43.50 francs, be prepared for anything.

It started, as all good things do, with an idea—that old post-Christmas, chase-away-the-blues, ocean ozone week away. And, of course, it was not our fault that the flight to Funchal, Madeira—a rugged Atlantic island featuring fado, sword fish, water mills, poncha, irrigation canals, landslides, and viewpoints—was so surprisingly cheap.  So many kilometres for so little money. What a deal!

On our departure day we ended up (after six hours in the air) back on the Portuguese mainland in Porto. We even got a 7-euro supper coupon, and our flight was re-scheduled for the following morning.

Oh yes. We should have been in Madeira, but having flown out to the island, and examined the seething cauldron of rain and cloud and tempestuous winds below, the pilot chirpily informed us that we were not allowed to land.

Day Two meant getting up at 4 a.m. (again) but this time, we managed to successfully touch down at the little Funchal Airport. This was accompanied with much cheering and clapping–pilot and crew included.

The airport runway extends out over top of the motorway at the edge of the sea. It actually tilts up a bit at the end which I guess is a serious clue to the pilot as to which way he should be heading. It is more or less like landing on an air-craft carrier, except that there is no elastic bungee to catch your wheels and stop you going over the edge and into the drink. 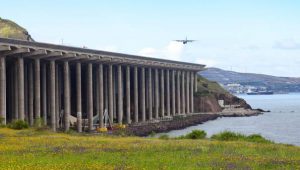 There is no flatness in Madeira (except in the middle where the wind turbines are all continuously blasting at full-speed and no one in their right mind would ever want to land there). Plus, Madeira is a volcano and seriously close to the earth’s core (information gathered from the Lava Tunnels Volcanic Visitor’s Centre) so dramatic danger can be just around the corner at any place or time.

Our big fight with the lying and cheating car rental company is now fading into oblivion. Our walks in the laurel forests with the view of the wine-dark sea far below are anchored firmly in our memories. The poncha and passion fruit drink at the warm and sunny harbour is recalled with longing. The flour from the old mill has been baked into bread.

We even got our full week’s holiday, as our departure was delayed for 30 hours due to the windy rainy airport being closed yet again.

A winter trip to an Atlantic island can, eventually, be crowned with success. Money is not so important: just take lots of time with you.