Well, Christmas is always a fraught time in this house.  In the good old days (Geneva in the 1970s and 1980s) Christmas glitter only came to the shops and the streets after The Escalade (Geneva beating off the Savoyards with the main weapon being an iron soup pot) had been properly celebrated in mid-December.

The dark historical parade with horses, fife and drum bands, and musket marksmen marching through the sombre streets, soon, though, was overtaken by twinkle lights and tat and lost its mysterious ability to transport us all back to a scary, frosty, noisy night in 1602.

Then, for many decades, we travelled abroad specifically (pay more get less!) during the festive season in order to avoid its commercial hysteria.  This ended some years back with our hotel entrance in Cochin being blocked by a larger-than-life, menacingly moustachioed, blow-up Santa. We kept plugging away, but who needs the psychological trauma of Feliz Navidad ringing in your ears to this day from playing on a continuous loop on a 5-hour flight? 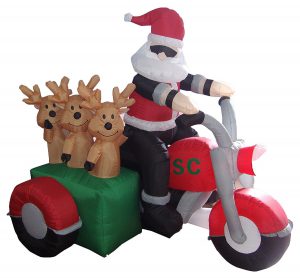 Christmas had won. We bowed out and retreated to the mountains with barely a Bah! or a Humbug!

However, in these days of grandparenthood, it seems churlish not to offer childish cultural entertainment to the little ‘uns and a traditional Christmas has been somewhat revived.

The tree was bought over the border in France and brought in last week (too late for a Canadian and too early for a Swiss) and decorated with lights (Canadian) not candles (Swiss). Glass ornaments (old ones from Czechoslovakia and new ones from China) have been hung. Chocolate figures (purely Swiss) have been tied onto all protruding tips.

The two-year-old who seems to have been running the place around here the last couple of days has definitively proved the second law of thermodynamics: entropy (movement and mess) is constantly increasing.

Chocolate, of course, has been a major inspiration and a solid source of energy in this. The pre-breakfast (6 a.m.) chocolate mouse (used as a bribe to get him to bed the night before) was a huge disappointment as it proved to have an unpleasant (marzipan) filling, and had to be compensated for with a solid chocolate Père Noel.

At this point, breakfast itself was redundant; however, a parking house was needed for the red car and the green tractor. Grandma cleverly thought of the stable of the old family-made Nativity Scene and proudly produced this from the bomb shelter and unwrapped all the hand-made figurines to reveal the True Meaning of Christmas.

The red car and the green tractor were parked and forgotten in the stable. Brittle oxen and asses quickly lost their legs and had to be repaired with bandages. Mother Mary was parachuted into a Strumpf/Smurf house to visit a while with Strumpfette.

And a carefully swaddled baby Jesus was last seen riding in the elephant wagon on a lego circus train.