Well, at the local supermarket in France two days ago, there was no butter on the butter shelf. I even checked twice, as I could not make my brain believe in the big black butter hole.

Figuring that the delivery truck had had an accident (it HAS been unseasonably warm lately up in the mountains) we were reduced to buying the very last package—a thin sliver of salty (loser) butter.

Fortunately, we always travel with a brick of Swiss cooking butter in the trusty blue Cool Box, so made it through supper to the news where we were officially (French government TV) enlightened as to the butter crisis: It was explained that a new scientific paper had just been published and butter was being extolled as the latest health food. Cholesterol was suddenly GOOD for you! The French population had gone wild, and butter was flying off the shelves! 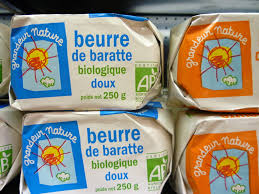 Now, our friends and neighbours in the Haute Savoy are no wimps. Their idea of a jolly good holiday is going bear hunting in Canada. Their summertime dream job is logging an entire mountainside and installing a new ski lift. Who had known that they had been so petrified of butter?

We happily settled down to digest this latest food fad and vowed to eat as much butter as possible before it was suddenly bad for us again.

Yesterday, though, there came a sad piece of breaking news on the butter front. The family arrived and they, too, had had a supermarket butter shock. Their Swiss-based research had led to the political/economic explanation that industrial butter had suddenly risen in price, and supermarket butter was now cheaper, and so every baker and cake-maker in France was now super-market shopping for the raw products for their buttery treats.

Every morning, they sweep the supermarket shelves empty at 8 a.m., and after that, there is nothing left for the rest of us except the occasional tub of omega-rich fish-oil spread.

Both stories were augmented by the fact that France now depends entirely upon its local dairy  production and the great international butter mountains of old have been melted by zillions of Chinese people who now want butter to put on their bread as they are no longer happy with their little iron bowls of boiled rice.

It certainly is true that there used to be cartons and cartons of very cheap and good New Zealand and Australian butter piled up in the supermarkets underselling the more exotic French regional butter brands.

Back at the shop this morning, and there was a new development. A typed sign flapping forlornly in front of the butter hole explained that there was a national butter shortage.

It did not explain the problem, but at least had the grace not to blame the scientists, the bakers or the Chinese.