Living in the Geneva countryside, it is possible to ignore the bright lights of Geneva for great swaths of time. With our village corner store, the farmer’s barn, the not-so-distant suburban malls, and the trusty postman everything is within comfortable reach. Even last Christmas I seem to recall ordering thoughtful gifts on-line and buying the in-laws pots of the local honey.

Anyway, yesterday afternoon I was surprised and delighted to find myself walking along the Rue du Rhone past the three old ports of Geneva—Longemalle,  Molard, and Fusterie. Back in the day, Geneva was commercially and defensively all a-bustle situated as it was at the end of its working / fighting lake.

Well, to tell the truth, I wasn’t really that delighted. The last time I had parked in Plainpalais, you could stamp your parking ticket and get a free TPG transport hour. I looked everywhere, but it seems that this courtesy has disappeared. Where the machine once stood, there is just a plastic map on the wall with chicken-scratchings too miniscule to decipher.

So I walked all the way to Rive.

I am pleased to report that many commercial establishments are hearteningly the same as ever—the stationery shop, the pharmacy from 1680, the great Molard butcher’s, the old family chocolate shops, the big toy store. Even the cigar shop (with you since 1911) is still managing to keep the flame alight and the ashes dropping. 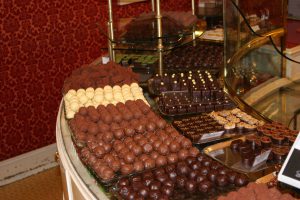 The bankers, in their shiny suits and brilliantine hair, strolling briskly in the sunshine with their rolled umbrellas were also familiar. As they have mostly been replaced by CrontoSigns, they are, perhaps, a little flashier and more numerous than before.

I met a beggar with an outsized plastic bag who asked for my help to keep living on the street as, he explained, it’s very expensive in Geneva. Then there was a very short unmusical musician strumming a broken guitar and making a moaning sound.

And finally I was stopped at a charity stand where two very high-pressure young men wanted my bank account number, my signature and a donation pledge.

I was only once asked for my autograph (in sunglasses I am a dead ringer for Sharon Stone when she’s having a good day), and spotted none of the girls. (Just for the record, I have seen Petula Clark, Yoko Ono, and Sophia Loren in the streets of Geneva.)

I reached my clinic on time, was whisked through the usual routine, was declared impeccably healthy, and came out happily swaying to the gentle bossa nova.

I am now very much looking forward to next year’s trip downtown, and am planning to cross the city on foot again, and to listen carefully to the music of the traffic in the city.

Attitude (and a song in your head) is everything.