Well, there’s a moving van over the road. This, in itself, is not unusual as the building is a two-family house (much in the fashion of North and South Korea) and the gentle tenants in the South constantly move away to greener, quieter, and less threatening pastures.

Moving vans rattle me. I started moving before I was one year old, and am always hopeful that where I am now is the final destination. When I was two, I accompanied my parents into a freezing Canadian winter. My first clear memory is packing my books into a blue tin pram. 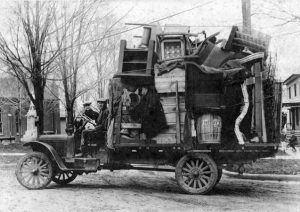 After my father became a foot soldier in the great Canadian Protestant army of the Lord we moved regularly every couple of years. I have changed continents and manses and apartments and houses dozens and dozens of times.

The extra-special Swiss moving trauma has to do with the cleanliness of the rented property that you leave behind. Windows have to be sparkling; the grout between the floor tiles scrubbed with a toothbrush; ceilings and doors washed. You have to boil the bathrooms in bleach. (Warning! An acquaintance did this with a wicked-strong product that took the enamel off the bathtub, and she had to buy a new one.)

Then you have to pass the real-estate agent test where a man with bad hair, bad attitude and a clip-board feels behind the back of taps to make sure there isn’t a bump of lime scale or a flake of soap.

If you fail the test, not only are you hygienically bankrupt, you also lose at least part of your blocked deposit (three months rent) as professional cleaners have to be called in to remove water spots from tiles, dust specks from the corner of drawers, invisible (to the naked eye) fingerprints from door handles. I’ve heard they work with microscopes.

Even if you have been asked to leave (due to a relative needing one of grandpa’s many, many houses) you have to scrub the kitchen raw (even though it is all going to be ripped out and replaced.) It’s more than depressing: it’s traumatic.

The moving van over the road has the English phrase “The Human Touch” written on its side. Due to wear and tear from my vantage point it seems to read “The Lunar Torch” – a much more whimsical and fitting concept.

I recall my old Uncle Harry being traumatised by his one big middle-aged move. He swore he would never ever do it again. He said it took him three weeks to find his tooth brush. His wish came true, and last I heard an urn containing his ashes is still in the back of the upstairs closet.

We are stardust, after all.