Back in the day, the tourists of Geneva organized summertime fun for themselves. There were the young British rakes who took row boats out onto the lake, banged drums, and set off explosions. There was the visiting royalty who on full-moon nights sent up little new-fangled hot-air balloons, so their guests could swoon in wonder at seeing two, or even three, moons. Then there were those endless wet summers when people sat around waiting for the rain to stop and telling each other horror stories: things like Frankenstein were written.

It was all jolly good fun. Not quite as good as the royal entries (Beatrice of Portugal, for example) of the REALLY good old 15th-century days with jousting competitions, mystery plays in the streets, and wine running in the fountains.

Of course, Geneva has been a tourist city since forever, and the lake and warm summer days have always been a winning cocktail and has now become a 10-day officially organized party called Les Fêtes de Genève.  However, in the grim reality of the 21st century The Geneva Lake Festival seems to have spun completely out of control.

Last year, for example, the fêtes lost an astonishing 3.5 million francs. A new director has been put in place and this year’s budget is a strict 3.5 million francs with an extra ½-million just-in-case reserve. They are on their last warning. Any serious financial foolishness, then their future is not assured.

Two days in, there has already been a major goof-up. To the uninitiated, this local political spot of bother is called a Genevoiserie or a Genferei and is the source of much ongoing mirth to the indigenous inhabitants and the rest of the country.

The Festival was scheduled to run from August 3 – August 13. However, the carnies with their flying elephant rides came into town early, optimistically set up their stands, and opened for bustling business on August 1st. The new director was contacted, and shook a cotton-candy-coated finger at them, but agreed to their going-for-the-money “fait accompli.” 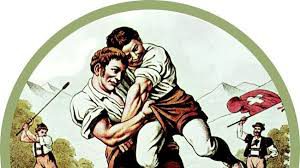 Now the first of August is the sacrosanct Swiss National Day—William Tell, flags, sausages, and fireworks. It is not to be tampered with. It stands alone, much like the Matterhorn and is not to be mixed with frivolity—except, perhaps, a round or two of Swiss wrestling.

You raise your thumb and first two fingers and take an oath. You put an apple on your son’s head rather than doff your hat to outside powers. You relish your Swissness.

Unfortunately, the Geneva town council did not give their permission for this early start of their Lake Festival, and are now full of righteous indignation, bombast and threats as they try to wiggle out of their flagrant breach of Geneva cantonal law. There is talk of fines of up to 60,000 francs for those dastardly spinning pink and blue elephants.

We’re all looking forward to see what is going to happen – especially the new director, one presumes. Hopefully an apple will not be involved.