The other evening, I happened to see Mrs Trump and Mrs Macron stepping off a Seine tourist boat in Paris. They were immediately recognizable as killing time on an “accompanying persons” tour. While their husbands attended to vitally important world matters, the girls had put on clean clothes and gone off to see the sights before their Eye-Full Tower dinner.

Now, I’ve been doing this for decades, and am most surprised no one has called asking for my professional advice. These two are obviously wet-behind-the-ears rookies.

Just in from Jeju Island off the south coast of South Korea, I must say that I judge myself to have reached the pinnacle of my accompanying person skills. At a major international scientific conference of over 600 people, we were 5½ ladies who took it upon ourselves to improve our minds and explore our new neighbourhood.

None of us spoke Korean (however, Shigeko’s Japanese English was the most acceptable to Korean eyes and ears.) Most of us were retired school-teachers, so enjoyed talking in loud voices and were not particularly attentive to what others had to say: this meant we didn’t get on each other’s nerves. Lulu knew how to read the map and Eva had remembered to bring along some Korean wons. Helen wore a sunhat and Ute kept us focused.

Our first entertainment choice was the thrice-daily Korean acrobatic display in Asia’s largest circus tent. Unfortunately, the acrobats had all run away, and the huge orange globe was abandoned and wind-swept (due to a sudden lack of Chinese tourists brought about by missiles and anti-missiles). We cheerfully made do with the Peace Museum and wax figures of famous peaceful people such as Bill Clinton, Mikhail Gorbachev and pop stars.

One of us had already seen the Hello 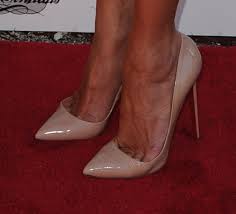 Kitty Museum and said it was only interesting for the first five minutes and she wasn’t sure if there were any Hello Kitty earrings. And after the Botanical Gardens and the Goof-Train ride we were too exhausted to visit the Teddy Bear Museum or the Ripley’s Believe-it-or-Not Museum. The organized half-day outing was composed of strenuous ravine and cliff walks in the 40-degree humidity. It almost killed us.

Anyway, Melania and Brigitte would have been welcome to join us on our improvised ladies’ program, but from what I’ve seen, wouldn’t have lasted five minutes.

First of all, when travelling, NEVER wear a white dress: it makes you look like a nurse or an ambulance driver, and, of course, the tiniest little brush with the black slime of a cliff-wall, and it’s a gonner. Dark or murky-coloured baggy trousers are the best bet for scrambling around in an unknown environment.

But proper footwear is the most crucial factor. You are not going to make it on the crater paths or the ravine board-walks in six-inch heels. You’re going to keep the bus waiting. Put on your diamond-encrusted sneakers instead, and come along with us next time.