Just as the French-speaking Swiss and the German-speaking Swiss have their differing languages, priorities, and cultures so, too, do their mountains.

A few days back, before leaving for a long-planned family wedding in Davos, I paid a rare visit to William, my hairdresser.  He gave me a new hair-style, cut me some bangs, and I was all set.

The Davos church was Roman Catholic with tastefully-placed saints and statues; the pipe organ music flew out of the loft and bounced off the walls; the priest reminded us of the miracle of turning water into wine—the point being that one mustn’t drink alone. I think. The crowd was mostly young, freshly coiffed, clean, and hip.

The bride choked up with emotion as she approached her grinning groom and everyone had a specially-wrapped tissue in which to shed their tears of happiness. I dropped a tear or two, but then came to my senses and realized that bride was far too young, beautiful, and thin to cry over.

The entire wedding party boarded a little funicular up to a charming Art Nouveau hotel and drank champagne and ate canapés to while away the late afternoon.  There was dancing and family films and speeches and too-loud music and a lovely old nonna (grandmother of the bride) who held my hand and showed me her hearing-aid. I lost an earring.

We had a lovely time, and all around us the magic mountains of Davos stood guard—the Jakobshorn, the Pischa, the Strela—cold, quiet, still, sedate and steady.

Returning home mountain-struck, we set out immediately to seek comfort on our local mountain just over the border in France.

Now there are many similarities between the two places.  For example, Shack and Schatzalp both begin with an “s”.  Both the alpine farmhouse and the famous sanatorium were built in exactly the same year. Both face full south and have grand views of the Alps.

The Shack is slightly superior, perhaps, as there is a small television in the chimney corner. 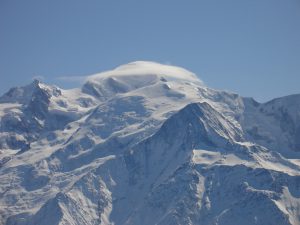 But after that it all goes downhill. A terrible tempest a few days back topped, uprooted, snapped off hundreds of trees in the valley. Crawling through and around two huge pines on the way up to the Shack, we arrived, pants be-holed, arms bloody, tear tracks through the face dirt, to find a perky pine with a bad attitude resting on the roof.

Cables and ropes and winches and chains and chainsaws combined with extraordinary skill, strength, and pithy Swiss-German vocabulary to solve the problem. My wedding hair-do lost its bounce, my new bangs were poking me in the eyeballs, and there was not an earring in sight.

No white wine to be found in the evening, the pink fondue was invented.

Mont Blanc looked down on all of this and smiled. This morning she put on her hat as she always does when bad weather is coming.

But then, she is a different sort of mountain.