In these confusing times when true facts are as rare as hens’ teeth and everything seems to be going backwards, I am suddenly confronted with the blossoming of a new commercial celebration: International Women’s Day.

Begun as International Working Women’s Day in 1917 in Russia, it grew out of various brave demonstrations in many countries led by socialist labour movements striving to stop the degrading exploitation of female factory workers. This got broadened into the suffrage movement which (eventually) worked. Even in Switzerland.

In 1977 the U.N. voted March 8th as the International Day of Women’s Rights. It is still an official national holiday in several ex-communist countries. My favourites are Nepal and China where it is a women-only holiday.

The day has laudable historic credentials, but it is being side-swiped and undermined in many alarming ways. 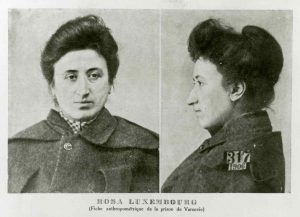 Yesterday our Swiss daily, Le Temps, put out a special edition “dedicated to women”.  Women associated with the Geneva School of Art and Design put together the paper and posted 52 photos of themselves and other important Swiss ladies. There were laudable interviews and analyses of successful women taking themselves and their roles seriously.

There were accounts of films by women, soccer by women, and (on the recipe page) the astute observation that women really can appreciate the finesse and romanticism of red wines—especially the gentle Swiss pinot noir.

Apart from the date being shifted to the 6th (I cynically attribute this to the fact that Monday is traditionally a “light” news day and so less important than the real day, Wednesday, when something more interesting might actually be happening) the full-page ads give us some very stale—possible rancid—food for thought.

The first is for a top-end Swiss watch. It features the chest of a famous American model in a low black bathing suit foxily biting the thumb of a boxing glove. The watch is diamond-studded and is claimed to have been especially created for dominant women.

The second ad lures us to the tropical island of Mauritius and invites us to live timelessly by buying an exclusive luxurious golfing property. And the third (on the back page) is a spread of three pale and ethereal young women’s faces. It offers a Japanese anti-ageing cream that lifts and firms us into the future.

Prices are not mentioned in this lure of diamonds, paradise villas, and everlasting youth. Women’s wishes, one presumes, are far beyond the crass vulgarity of money.

For the more modest consumer, the local supermarket is offering vaguely funereal floral arrangements (does one buy them for oneself?) and the local drug store has 40% off a Swiss wrinkle reduction cream (would you dare buy some for your mother?)

Sigh. It’s so hard to know how to celebrate properly.

Oh yes. I almost forgot. There was one page of “real” news (the election in the Valais) in Monday’s feminine Le Temps. Both articles were written by a man.