A few weeks back, I read an article about how a third of accidents that happen to the over-60 crowd are due to falls brought on by lack of balance. To remedy this, Yoga and/or Tai Chi were highly recommended.

I have started Tai Chi. Well, I ordered the book (Classical Yang Style) and am working on the basic stance. The big fat tome is open to the correct page and placed in a Zen manner on the corner of the kitchen table. Every time I pass, I hold the Ma Bu (Horse Stance) pose for 20 seconds.

After just a few short days, I have quickly learned to not pass that particular corner of the table anymore and I am instead busy working on my inner yin and yang. 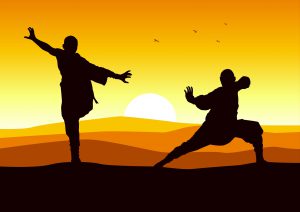 Lying flat on the living room sofa, breathing properly, I have just read three weeks’ worth of newspapers, and before dozing off, made the most remarkable discoveries.

For example, the “gig economy” was mentioned twice. I had somehow missed this expression. It means that no one has a proper job anymore. You just work short gigs (driving cars and making deliveries or videos seem to be the most popular choices) and then carry on with living. Legal clarity has resulted in the possibility that even zero-hour contract workers could have the right to vacation pay, daily work breaks, and redundancy payments.

This granted me a huge epiphany moment which solved the recent media flap about whether robots should pay taxes. Well, they’re going to HAVE to, as everyone else is going to be getting money for taking tea-breaks while not working.

Then there was the article about not showering as it seems that this daily ritual just wrecks your microbiome. It apparently takes about six months to completely give up this bad habit, but is well worth it as you save water and can avoid all those dastardly beauty products that are polluting the planet. Your bacteria proliferates and is extremely happy.

Obviously the man who is promoting this (a senior editor at The Atlantic) has not recently had to look after a one-year-old with a gastro. Anyone who has ever been covered with curdled milk vomit combined with liquid yellow poop will never, ever, turn their backs on a good hot shower with bubbles and perfume galore.

However, the very best item was the London Design Museum’s recent show which included a military invention to help soldiers carrying heavy loads in the battlefield: power underpants. Little sensor-packed pods and miniature motors pull strings in the fabric that give you extra support and help in sitting down or standing up. This makes so much sense, I’m sure it was a closely-guarded military secret for many decades before finally being leaked to the general public.

I am asking for a pair for my next birthday, and only then will move around to the deserted Tai Chi corner of my kitchen table and attempt stance two, Deng Shan Bu.