The full force of the rentrée is with us. The roads are filled with cars, the schools are filled with kids, tanned doctors are back in their offices, exam sessions are underway, the usual French fall strikes have begun, and parking places in town have become rarer than hens’ teeth.

On the political scene here in Geneva a major story has just broken concerning the brilliant invention of the green plastic garbage can. The person in charge (the guy who brought us the concept of letting nature go wild along our public roads) has come up with the startling idea of having a compost bin handily situated right in your very own kitchen. This is to avoid putting heavy things such as corn cobs and nasty inedible sweet potato muffins in your main garbage can. This will, in turn, save money at the cantonal incinerator.

Fortunately, I don’t need a new garbage can, as I still have one that was given out by the Geneva government some 30+ years ago. In those old days of generosity, every household was given 2 garbage cans—a small one of green plastic and a bigger brown brother.  They were meant to stand side by side under the sink.  My retro green James-Bond-era plastic garbage can is virginal as buying the cute little plastic bags that fit inside, and then storing rotting organic waste near a hot kitchen sink somehow struck me as a stinky waste of money.

Agonizing over the circularity, unoriginality, and expense (1.6 million Swiss francs) of green plastic cantonal thought; my politically incorrect garbage can habits; and Geneva’s ever-growing green plastic garbage can mountain, I was struck by a conversation coming from the backseat of the car. The two passengers were discussing the origins of hiccups. 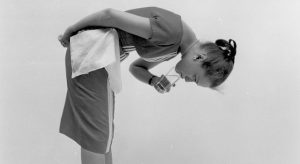 It was hypothesized that hiccups result from stress, the proof being that the hiccup victim got an exceptionally bad case right after a small scholastic exercise concerning the multiplication tables. She had completely forgotten some of the trickier calculations (8×7 was a real bummer) due to the summer holidays.

The conversation went on to conclude that either the summer holidays should be shortened to two weeks (so that such lapses and distressing medical episodes could be avoided) or that, like bears, we humans should be able to hibernate all winter and, thus, avoid school entirely.

The average age in the back seat was 9 ½.

Perhaps Canada has got it right.  I’ve not heard anything about free political garbage cans. And there primary school teachers are simply cancelling repetitive and useless activities.

For example, cursive writing is no longer taught. Students learn to print in block capitals – much like the Romans. The curlicues and flying fantasies of penmanship are no longer skills deemed necessary. Stringing things together, like pinning clothes on an outdoor line, is simply a tiresome and irrelevant task.