Well, on April 12, 2016 at 15:36 a 28-metre, 4-ton log smashed its way through the back wall of my mountain house (fondly known as The Shack.) Having slid down from a considerable height, it was moving at speed and went on to pierce the upper floor, the middle wall, and the front stone wall. There it came to a halt and that was that. There was an uninvited log in the house.

Being a polite log, it had just barely missed all supporting beams and its discreet exit was underneath the living room window and above the basement door. Damage was considerable, nevertheless, and the shock-value was tremendous.

To remove the log was dramatic and dangerous. More damage was inevitable, but total disaster (house collapse) was miraculously avoided.

The new open gashing wounds were again boarded up, pulverized furniture dragged out into the rain, the stones from the old walls gathered up, and unrecognizable debris shovelled into industrial-strength garbage bags. 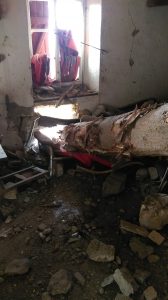 Meetings were held to discuss insurance claims and counter-claims. The youngest man on the wood-cutting team was held responsible. Adjusters were called in, photographs were taken, and the site examined and re-examined. Estimates were submitted, convocations sent out, contracts signed, and the repair work has finally begun.

For example, there is a cheery orange cement mixer in the filthy, yet breezy, living room.

Yesterday, on June 23, 2016, by a majority of 52%, the U.K. voted to leave the European Union. England was always a renegade log ready to slip down the mountain on a rainy day.  And, sure enough, it has pierced the house that is Europe.

But, like The Shack, old Europe has not fallen. Its beams have not taken a direct hit; its foundations are holding.

Neither accident seems to have been either an act of God or a natural disaster. Any insurance company worth its salt would easily blame the cocky young woodcutter, David Cameron, who has now suddenly discovered that being prime minister can be an extremely dangerous job. He has decided to quit. Lumberjacks on the same team (Northern Ireland and Scotland) claim their complete innocence.

But now is the moment when serious attention must be paid. Removing the British log will be difficult and dangerous. If it’s successfully removed new rents and fissures will appear, more stones will fall, and more glass will be shattered. If it’s pulled out too fast or too hard or too carelessly, beams will give way, the roof will cave in, and Europe will fall down.

It will, of course, take years to clean up the mess, to shift through the rubble, to try to find things that can be saved, and to not cut oneself on the broken crockery.

So, Europe, on this shocking day after the Brexit vote, take heart. It’s a huge mess, but with hard work, honesty, and a lot of luck, perhaps you, too, will have an orange cement mixer in your miraculously-saved living room one day.