Pets in Japan are taken very seriously indeed. Just this morning my neighbour across the road took her medium-sized dog for a walk. I only saw this after he had been arranged in an old-fashioned child’s perambulator and covered in blankets.

It only dawned on me that the contents of the buggy were canine when the occupant sat up and barked with wild abandon when two small dogs on different length and coloured leashes crossed its path. The pram-guy did not try to jump out and run an attack on the two nattily-clad poofters (which for me would have been an entirely natural reaction) but barked them out of his field of vision. His pram-pusher did not break her stride, spoke not a word, and quietly carried on.

Now I don’t know. Perhaps the chap in the pram was old and lame, was the quadriplegic victim of a train accident, or a retired Robo-Dog who had worn his paws off digging for people in natural disasters. But upon examining several similar conveyances I have reached he shocking conclusion that there are more dogs than babies in prams. (Human babies are carried in pouches on the fronts of their mothers.)

The pram-dogs are inevitably being pushed about by women of a certain age and have been seen visiting and rubbing noses with other dog-friends. It is not a cause of hilarity, mockery or distain. It is a cultural conundrum, perhaps a Tokyo suburban equivalent of swimming with the dolphins.

The wilder set of dogs that are not installed in prams spend a lot of time at the beauty parlour (the one in the neighbourhood is called Pet Paradise) and come out looking shockingly like brand-new stuffed toys. At their very finest (right after their shampoo and blow-dry session) and if the weather is propitious (neither rainy nor cold) they are allowed to walk proudly naked in all their furry glory. 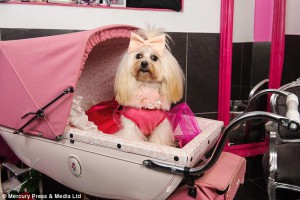 all those other days, they wear clothes – raincoats, felt jackets, colour-co-ordinated sweaters and scarves. As it’s cherry blossom season, there is a lot of pink about.

These small orderly pets pee in a very restrained dog-like manner on the ubiquitous electricity poles and their human-slave squirts the spot with a water sprayer. They poop politely on bits of earth between the sidewalk and a tree and one of their staff-members picks up the product in a little plastic bag and squirrels it out of sight.

I don’t know how this works with the pram-dogs, and am looking into the possibility of dog-diapers alongside the Poopy Pickers and the dried-fish Pet Kisses over at the Peacock Department Store.