There is a Glory Church on either side of a large and luxurious hotel on the island of Okinawa.   Both white and gleaming churches look like they are made of plastic and icing sugar and attract a continuous stream of well-heeled clientele for fake weddings.

Like the Ancient Mariner, I stood outside a church anxious to catch a wedding guest with my glittering eye to tell him about my latest very bad trip, the albatross around my neck, and my new appreciation for slimy things from the sea, but there was nothing doing. I think the fake bride and groom and all their family and friends get into the church via a tunnel from the hotel and crawl up through a trap door. 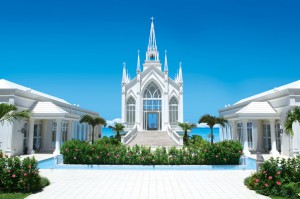 This is Japanese discretion at its very best. Wedding dinners also take place in private rooms and the regular hotel guests were not at all disturbed by raucous speeches and bridal youth and beauty.

Now I have nothing against wedding celebrations. I recall my own fondly—Toronto Town Hall, followed by some beers with Injun Joe at Grossman’s Tavern and then dinner at The Three Little Rooms. It was lovely. Four people were involved (not counting Joe) and the town hall man got my husband’s name wrong. After forty years, we still discuss this legal loop-hole with vigour from time to time.

But what I seriously object to are public weddings that suddenly spring up in the middle of a hotel beach and your favourite spot is cordoned off and a wedding platform erected. Tinkling bells. Flower chains. Soppy mindfulness vows. Lovely clothes (compared to your state of splotchy sunburn and irritating sand-rash and unflattering bathing costume and sunhat.) All of it as fake as fake can be.

Today I have just learned that you can have a tourist wedding at an old Zen Buddhist temple in Kyoto—the 500-year-old Shunko-in. This strikes me as much more culturally deserving. The young deputy abbot-monk was born inside the temple complex but is American-educated (and married to an American). He is turning his temple into a business as the roof needs fixing. He gives meditation courses which focus on entrepreneurialism, breathing, and Zen updates.

You can order a friendship marriage, gay, lesbian, transgender marriage, and even a normal one. Most of them are fake, of course. You can even stay at the guesthouse, but have to head into the fleshpots of town for food and entertainment (much like in the temple heydays of old Kyoto.)

So, if you are in the market for a useful fake marriage, try Kyoto’s kirk upon the hill, Myoshin-ji Hanazono, and look out for a gentle-faced Buddha-clone called Takafumi Kawakami.

For a price, he can fix you up.