Before I begin, let me make it completely clear, that nothing on this earth can beat the finest and freshest of Japanese food. An artistic sushi with the rice just-so; rigorous rectangles of tuna sashimi on freshly grated radish; the most delicate of green teas. These things are gifts of the gods.

However, to alleviate boredom-due-to-deliciousness, the Japanese have invented some other foods that make one sit up and take notice.

Until he came across Shirako my husband had prided himself on eating anything that Japanese cuisine could throw at him – Hoya (sea pineapple), Namako (sea cucumber), Uni (roe or gonads from sea urchins) were all as nothing. He thrilled to Fugu, (potentially poisonous puffer fish), Sazae (horned turban sea snail) and Kegani (horsehair crab). 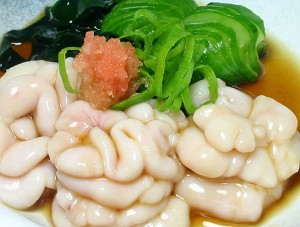 Out for a company dinner a few nights back, he met a dish which he thought could have been either intestines or brains. Nothing so pedestrian. It turns out to have been a popular snack or starter called Shirako which means “white children”. It is fish sperm in its original long and windy sack.

Well, I suppose one could combine a dollop of Shirako with a blob of Mentaiko (marinated cod roe), wait a while, and come up with Shirouo no oodorigui (small dancing fish) that one eats exactly as a whale would–alive.

So, before going out for a regional sake-tasting evening yesterday, I looked up some exotic tasty treats that I thought might make a surprise appearance amongst the sake glasses. On the way there I craftily asked husband’s Japanese colleague if HE ate them, and I am extremely pleased to report that there are some culinary challenges that even the most seasoned of all Japanese diners avoid.

Husband’s colleague is a sprightly older gentleman and no wimp. He quite loves sea cucumber and fermented shrimps; however, he draws the line at Skiokara (salted and fermented fish guts that is served as a heaving smelly orange slime). When questioned about Nankosu (breaded and deep-fried chicken bone cartilage) he said you needed very strong teeth. And he was very firm that Funasushi (made of carp fermented for up to 4 years) was a real stinker.

Well, it turns out I had nothing to fear but fear itself. The sake restaurant menu had pictures of the most pleasant of foods—vegetable tempura, minced chicken grilled on sticks, a slice of pork. For a walk on the wild side we also had a plate full of wieners. And we all know what healthy goodness is inside them.

My sister suggests I never leave the house without a boiled potato in my pocket. That way I can casually whip it out and put it on the plate with the Fugu ovaries pickled in rice bran paste or beside the Tobino (flying fish), spear it with my chopsticks, and ignore all the rest.

We are heading to the island of Okinawa imminently. There, we have been told, the gastronomic specialties include Rafute (pork belly), Mimiga (pig’s ear), Umibudo (seaweed in the shape of grapes) and Yagi Sashimi (raw goat meat).

I have a pan of potatoes on the stove.