I have just learned that Japanese people don’t really like to eat whale. I, personally, have always found it over-rated. The meat is fishy and chewy – exactly as one would expect.

It seems that whales were eaten as a last resort when the country was hungry after WWII, and the hunting of whales today is just a bureaucratic remnant of that trying time. For a generation of kids (of about my age), whale soup was a staple of school lunch.

Normally-constituted Japanese people today prefer beef or chicken or shrimp and there are only two whale meat sellers left in the Tokyo fish market. No one cooks whale at home; it would take months to get the deep dark smell of the sea out of the apartment. 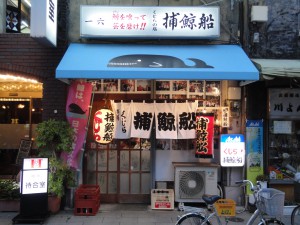 Of course, the good things you eat as a child are what you like and, thus, certain traditions are established and preserved until they die a generational death. My daughter is a pure cultural-fusion product and her food choices are totally outlandish and at first glance incomprehensible.

From the Swiss side of her family she has picked up an abiding love of boudin (noir). I used to serve this once a week in winter blood-sausage season. I, personally, ate only the boiled potatoes and apple sauce. One extremely embarrassing day, I was pulled over by the lady running the crèche as the morning’s diaper had revealed a product of the most alarming colour. I explained about it being Wednesday, and boudin day was Tuesday. I believe I was put on some sort of Crèche Culinary Watch List.

From my side of the family comes that old Canadian staple of wieners and beans on toast. This was eaten with my daughter exclusively when Swiss husband was absent – preferably out of the country and as far away as possible. Always a bit of a food snob, only Heinz beans were served and the best brand of wieners cut into perfect rounds. A little Swiss friend was brought home for lunch one day; she had never had such a wondrous meal. Departing for school she thanked me effusively for the nice soft meat.

Anyway, from where I come from whales, rabbits and horses are all left to roam around uncooked. Instead Sloppy Joes, shepherd’s pie, fish-fingers, macaroni & cheese, Yorkshire pudding, hamburgers and hotdogs and scrambled eggs with ketchup are grist for my version of the Canadian food mill. Coming originally from the north of England potatoes figure at least once a day; and the existence of Swiss rösti has contributed greatly to my perfect cultural integration and happiness.

Yes. We are what we eat—individual memories and comforting confusion. Whales included, one presumes.