Inexplicably, I’ve never been invited to the World Economic Forum in Davos. But last week, I was there, in spirit, eating canapés with the rock stars and the bankers.

I was there alongside Justin Trudeau as, you see, I knew the Prime Minister of Canada’s parents, Pierre and Margaret, intimately.

All Canadians of my generation did. Pierre Trudeau rose from the political ashes of the old turgid boring times. He was sparkly, urbane, much-travelled, witty, wise, and sexy. He wore a flower in his buttonhole. His politics were progressive as he sloughed off all things conservative and reactionary. He was interested in the new – as we all were in the late 60’s. Arrogant and dismissive of what he saw as nonsense, he struck a celestial chord in my teen-aged brain.

Thirty years her senior, Pierre married 22-year old Margaret. The philosopher prince wed the garden fey (she sewed her own wedding costume; it had a hood.) She had babies, and then became a highly successful Rolling Stones groupie. In his autobiography, Keith Richards says he was shocked. She then spilled all the beans in a book. The Canadian media had a dazzling time and Pierre got custody of the kids. An old University of Toronto comrade gleefully announced that after Justin Trudeau’s recent election, Justin’s mom contacted his wife, Sophie, and offered to give her some tips on being Canada’s first lady.

Anyway, the Trudeaus’ first-born was called Justin. “A Just Society” was the political slogan of the Liberal political campaign in 1968. Pierre Trudeau had also been Justice Minister before his election as Prime Minister. I dislike dynasties, but his father’s career was not only Justin’s name but also his destiny. 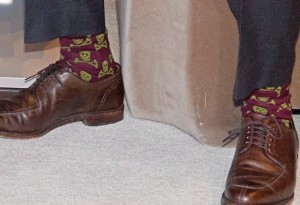 Justin Trudeau (age 44) wants to be kind to everyone. He came to Davos to promote a trade agreement between Canada and Europe. With falling oil prices, the high price of cauliflowers, and the state of the Canadian dollar, the country needs all the help it can get. He also wants 25,000 Syrians refugees in Canada as soon as the weather allows. Winter coats are a must. He wants women, children, and family groups. The odd man can come too, but he has to be gay.

I just heard Justin, in Davos, saying that he’s “a feminist” which complicates things even further. He wants to legalise marijuana which is a popular move among a certain segment of the Canadian population, but I guess won’t be much comfort to the dozen Swiss Army soldiers who got busted smoking pot while on guard duty at the Davos Forum.

Anyway, the children have come of age. May the force be with you, Justin, I wish you and your lucky socks all the very best in our modern world filled with mayhem and misery.