To chase away the January blues, I’ve just bought a pair of tall pink flamingo standing lamps. I think the plan is working. They have been tastefully placed in the dining room and give off a serene womb-like glow.

It’s not easy to find such beautiful pieces of kitsch in Geneva shops, and ordering things on-line just takes the fun out of the game. I once was fatally attracted to a life-size Grey Heron in a little under-stocked shop in Carouge and was told it was window dressing and not for sale. Deep shopping disappointment has been trailing me since that day.

Anyway, forget the Canada Geese and the first giant robin of spring, it is flamingos that come straight and sharp from my Canadian childhood memories. My very first best friend, Brenda, belonged to a clan of neighbours living over the road in a rural southern Ontario village. They were two generations of Georgian planters (three with Brenda) and had built themselves massive white houses to be near the elderly matriarch of the extended family.

Coming from the deep American south they were exotic with birdbaths and peanuts growing in their garden. My friend’s grandfather fashioned objects in his basement out of metal bottle caps – baskets, rabbits, jalopies. Brenda and I watched him work and listened to his stories of diving into Lake Ontario, inadvertently swallowing a tape worm egg, and having a tape worm in his stomach for decades and decades. We loved him. 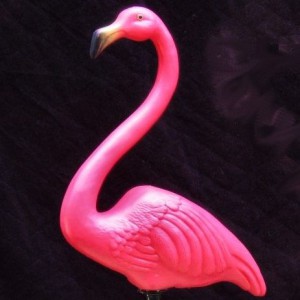 Their prized possession was a pair of life-sized pink flamingos, and when a chosen warm summer day was coming to an end these would be placed at the bottom of the huge immaculately-tended garden. Two white lawn chairs would be placed behind them, a cooler filled with ice and soda bottles was put in place, and we were all ready for the evening hobby of car-spotting. Cars would drive slowly past, slow down, and driver and passenger (out for the evening motorized promenade) would stop to chat for a while. Strangers would wave. It was a glorious time.

It wasn’t my fault I bought the pink flamingo lamps yesterday. We passed them in the shop as we were on our way to see our just-born grandson. The shop was shut. Today, again, I took the same path to the Maternity ward, and they were still there. What was I to do? Abandon them to their cruel fate of having some strangers buy them, and perhaps even split them up?

Never. After top-level consultation with my grand-daughter, the pair now glow warmly together. One day in a few years time, my grandchildren and I will take the flamingo couple to the end of the drive way at the end of a warm summer day and plug them in. I will tell tall tales about my long-lost Lake Geneva tape worm. We will pop open the old-fashioned glass coke bottles that can still be purchased just over the border in France. Cars and bicyclers will slow down in awe and admiration and we will wave.

It’s not the same, but it’s not different, either. It’s a fine January dream of a July pink flamingo evening in Canada.