Everyone knows about Christmas left-overs. With the turkey, you make sandwiches, stews, and a final swan-song turkey-noodle soup. The rest gets given to the cat until not even he will touch it any more. The carcass is unsentimentally thrown out with the garbage.  Leftover champagne, on the other hand, becomes a delightfully refreshing breakfast beverage.

However, left-over Christmas trees are a different story. They have had a moment of true glory and domestic beauty. They have been bought, created, and imbued with those most powerful of emotions: delight, nostalgia, and wonder. They have become your friend.

When I first came to Switzerland, my Swiss-German mother-in-law had real candles and wicked sparklers on her Christmas tree. I was terrified, and in pitying tones was assured that the tree was so fresh that not even a blow torch could catch it alight. 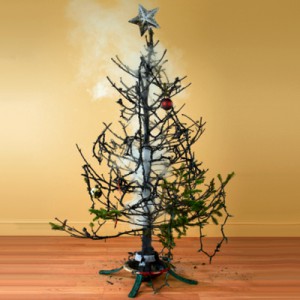 This was seriously confusing, as in Canada the tree is brought into the house any time after the first of November. There used to be coloured light bulbs that got hot enough to singe the branches. By Christmas Day, the thing was well on its way to being a piece of naked tinder with a few forlorn candy canes and bits of tinsel. There were needles everywhere.

Not wanting to be thought of as wimpy Canadian, I, too, took up this Swiss naked-flame tradition, and it was found so charming and delightful by English friends that they did manage to burn out their London living-room. After this event, I slowly and craftily changed to electrical lights and the big Christmas tree water bucket (a tasteful green) became redundant.

There are no community January Christmas tree-burning ceremonies here, instead the individual trees are dragged in the direction of the compost bin. They can be seen littering the sidewalks and poking out of garbage chutes. They have angel hair and golden ties from the chocolate ornaments that used to be on them. In this post-Christmas world it is a depressing and sorry sight.

Not in this house. We don’t abandon old dead things so easily. Dec 31st finds our Christmas tree stripped of its chintzy ornaments and gutless electrical lights and sporting real burning candles out in the garden. If it survives that, it is hung with bird balls and becomes a huge bird-feeder. The birds, the turkey-stuffed cat and our grand-daughter find this most interesting.

Eventually. Christmas magic melts away, and the tree becomes part of the springtime garden clean-up. The tree has been a virgin, a bride, an acrobat, a servant and finally a corpse. Spring comes and the dead tree goes. The circle is complete.