I’m being bombarded with seemingly innocuous, but highly guilt-inducing little presents—name stickers, agendas, calendars, post-it pads, cards and envelopes, recipe booklets, wrapping paper, pencils, notebooks, and even the occasional ornament. I haven’t yet received the package of chicken noodle soup which was such a delicious surprise last year.

These presents are accompanied by an informative letter, some relevant visual aid and at least one payment form. They each wish me a wonderful Advent season and a very Merry Christmas.
Yes. It is charity / NGO fund-raising season yet again.

Now, I have nothing against sick children, sadly displaced people, polar bears, unemployed people, blind people, mentally ill people, leprosy camps, people living in the mountains, people living in religious villages in the Philippines, people who paint with their feet or hungry St. Bernard dogs. In fact, I would like to help all of them.

And I quite like the idea of giving my Canadian brother-in-law a little piglet that will be presented to someone in Haiti which will, in turn, allow schooling for the children; or 20 chickens (for only 40 francs) that will peck around somewhere in Bangladesh and create eggs and cash for an entire family.

He seems to enjoy receiving these no-frills, no-nonsense, non-presents. I gave him a ½ metre of Swiss steam-train track for his last birthday. I think he’s really enjoying it.

I also fondly remember the goat that my Swiss son-in-law presented us with a few years back. He had signed the card with his name—which I had unfortunately thought was the name of the goat for many many months. 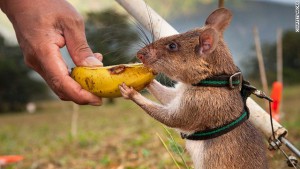 Adopting a de-mining rat is also another really good idea, but so far no one has send me the relevant information. Fortunately, I have my own private sources.

Each of the above makes much more sense than the usual slippers, socks, and soap selections. But then, Christmas was never about sense, it was about miracles; and now, even worse, it’s all about stuff. And once you have your basic stuff – which boils down to a couple of smart little machines – all the rest is entirely arbitrary.

So, buy a solar lamp, a sewing machine, a duck, a latrine, a fishing net, or a blanket and proudly present the gift certificate to your person-of-choice. They will love it – but be sure not to forget the bonbons, the bottle, or the book that goes along with it.