Things are definitely looking up. I’ve just received an invitation to go to a Hallowe’en party. Well, not exactly a personal invitation; it is taped onto the garbage container over the road and invites the whole entire village. Not only will there be an exciting costumed ball, but also a Canadian buffet.

Hallowe’en is a new invention in Switzerland. When I arrived in 1977 there was not a Candy Kiss in sight, and hollow Jack o’ Lantern pumpkins were not available. I had to buy an entire solid cooking pumpkin that weighed about 15 kilos and scrape it out. There were no witches, goblins, or ghosts roaming the streets. We had to do it all in-house with a select Japanese friend from the local primary school and some bed sheets. The pumpkin was carved with great care and difficulty and the candle lit to keep the spooks away for another year.

I rather enjoyed the exclusivity of my own cultural identity. I made the connection to All Saints Day of November 1st and the chrysanthemums on family tombstones—which I considered a much more sober and mature soothing of the spirits. However, I perked up with Escalade just a few weeks later, which fulfilled the Hallowe’en ritual entirely – a child’s event celebrated with disguise, ringing the neighbours’ doorbells, a song, and candy treats. 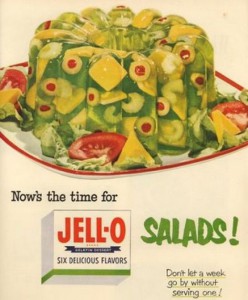 Now the second element of the tempting village Hallowe’en party invitation, the “buffet Canadien,” is quite another matter. When I first encountered this in Switzerland, I thought it was some sort of delightful smorgasbord of Canadian foods – pancakes with maple syrup, moose-burgers, and boxes of fresh Tim Horton doughnuts. Well, this is not the case. It’s the old dreaded pot-luck supper which is traditionally a wicked thing.

Back in Canada, my father’s church would run a “pot-luck social” every now and then to cheer everyone up in the wintertime, and hungry as I always was, you had to be very very careful. My mother had an ingrained fear of casseroles (you never knew what was in them) and a pot-luck supper was Casserole City: spam, tuna, corned beef, cabbage, and potato were all there featuring confusingly differing colours and textures. Vegetables were salads with peas hanging suspended in lime-green jelly. Pies were raisin and apple and lemon meringue. The adults drank weak coffee and the children drank milk.

I met my first olive at a pot-luck social and was horrified at the unfriendly unknown taste. I thought my mother’s predictions were going to come true and death was imminent.

If I go to the village Hallowe’en party, I sure know what I’m going to take. And it won’t be olives.