Well, you can’t go away for five minutes without all hell breaking loose.

Battling the usual post-trip miasma of fragility (brought on by the airplane-induced cough and cold, the suitcase full of dampish clothes smelling vaguely of fish, and the towering heaps of unlovely mail) there is a new and unwanted twist to the tale. A mouse family has moved into the kitchen.

Understandable as this may be in the coolish days of late September, it will not do at all.

There is a definite moral dimension to having a mouse in a Swiss house. It implies bad housekeeping, slatternly ways, possible plague, and total chaos. It is a matter only discussed amongst family and with closest friends. It is a sign of domestic defeat.

There are several stages that lead to mouse awareness and acceptance. The first is denial: that rustling sound is just the onions resettling themselves in their basket. The second is terror: this usually involves the actual sighting of a small rodent scurrying along the edge of the counter. The third is victory through death.

The mice have been living in the kitchen cupboard. This is the most sacrosanct of places. As a matter of fact, in WWII if a suspected German was claiming to be Swiss they made him say “Chuchichäschtli” (gargle it right at the back of your throat). The word means kitchen cupboard in Swiss German dialect and if the accent and inflection were wrong some sort of giant mouse-trap was presumably used on the culprit. 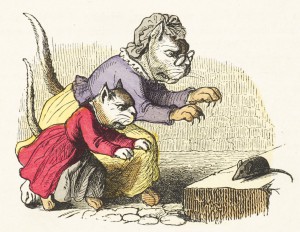 There are different ways of managing a mouse problem. A traumatized French-Swiss friend came across a mouse in her upstairs bedroom. She methodically removed every piece of furniture and clothing from the room; examined, cleaned, washed and ironed every object; then replaced them all carefully. It took weeks, but the mouse had been cleaned out of existence. I like to think of it reduced to a wafer-thin shadow-mouse folded somewhere in her underwear drawer.

A bachelor buddy of my husband’s, living in an old manor house near Zurich, was tolerant of mice if they stayed INSIDE the bread box. Guests who thought they had been eating seeded bread for breakfast quickly changed to yogurt.

And then there is my brother-in-law’s famous mouse tale. Many decades back, Stanley came down to make his breakfast in a Southern Ontario hippie haze. He put eggs on to boil, and toast in the toaster. A mouse, obviously cleaning up the crumbs at the bottom of the toaster ran out, hit the gas flame and jumped into the pan of boiling water. Told with brio (and sometimes with several additional steps) this has become a family mouse mantra passed down through the generations.

With a battery of traps, I have captured three, and Elena (the cat-minder) two. The plastic Swiss traps were craftily named Power Cat. Henry, the real cat of the house, is pathologically frightened of mice, and makes huge, exaggerated, scaredy-cat steps through the kitchen when there are mice in residence. The Canadian traps were called Victor. Peanut butter was the bait of choice.
The kitchen is now a mouse-free zone.