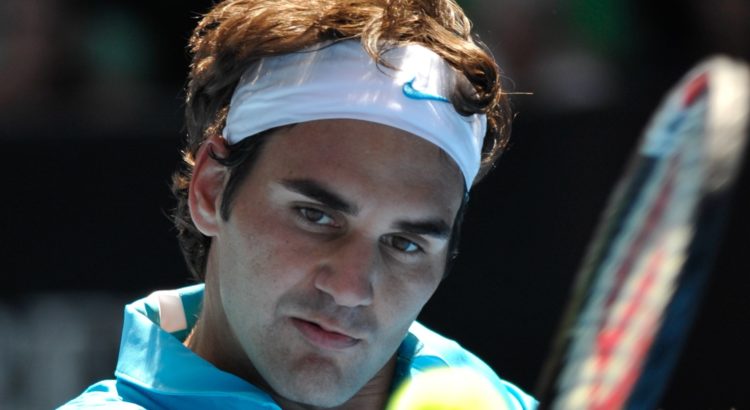 Roger transcended tennis. Over the years, we all drained global supplies of superlatives to describe the phenomenon that will always be Roger Federer on a tennis court.

Here are some accolades from sport writers, incredulous adversaries, gob-smacked fans and legends of the game. It’s an homage to the Swiss athlete whose artistry with a racquet gave immeasurable pleasure to a large part of the planet.

Federer as a Religious Experience

Perhaps, the most famous profile of the Swiss tennis player appeared in the New York Times in 2006, written by the late, acclaimed US writer David Foster Wallace. It was almost 7000 words. A large chunk was devoted to one exchange between Federer and Andre Agassi. The writer coined the term Federer Moments when the Swiss tennis-man seemingly rose above certain physical laws.

The article was titled Federer as a Religious Experience and it began like this:

“Almost anyone who loves tennis and follows the men’s tour on television has, over the last few years, had what might be termed Federer Moments. These are times, as you watch the young Swiss play, when the jaw drops and eyes protrude and sounds are made that bring spouses in from other rooms to see if you’re O.K.”

Here’s a longer excerpt from the same profile:

“The metaphysical explanation is that Roger Federer is one of those rare, preternatural athletes who appear to be exempt, at least in part, from certain physical laws. Good analogues here include Michael Jordan, who could not only jump inhumanly high but actually hang there a beat or two longer than gravity allows, and Muhammad Ali, who really could “float” across the canvas and land two or three jabs in the clock-time required for one. There are probably a half-dozen other examples since 1960. And Federer is of this type — a type that one could call genius, or mutant, or avatar. He is never hurried or off-balance. The approaching ball hangs, for him, a split-second longer than it ought to. His movements are lithe rather than athletic. Like Ali, Jordan, Maradona, and Gretzky, he seems both less and more substantial than the men he faces. Particularly in the all-white that Wimbledon enjoys getting away with still requiring, he looks like what he may well (I think) be: a creature whose body is both flesh and, somehow, light.

This thing about the ball cooperatively hanging there, slowing down, as if susceptible to the Swiss’s will — there’s real metaphysical truth here. And in the following anecdote. After a July 7 semifinal in which Federer destroyed Jonas Bjorkman — not just beat him, destroyed him — and just before a requisite post-match news conference in which Bjorkman, who’s friendly with Federer, says he was pleased to “have the best seat in the house” to watch the Swiss “play the nearest to perfection you can play tennis,” Federer and Bjorkman are chatting and joking around, and Bjorkman asks him just how unnaturally big the ball was looking to him out there, and Federer confirms that it was “like a bowling ball or basketball.” He means it just as a bantery, modest way to make Bjorkman feel better, to confirm that he’s surprised by how unusually well he played today; but he’s also revealing something about what tennis is like for him. Imagine that you’re a person with preternaturally good reflexes and coordination and speed, and that you’re playing high-level tennis. Your experience, in play, will not be that you possess phenomenal reflexes and speed; rather, it will seem to you that the tennis ball is quite large and slow-moving, and that you always have plenty of time to hit it. That is, you won’t experience anything like the (empirically real) quickness and skill that the live audience, watching tennis balls move so fast they hiss and blur, will attribute to you.” 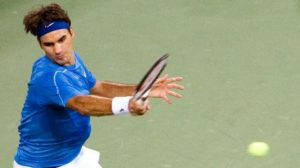 The Guardian’s sportswriter Barney Ronay spoke of beauty, grace and sensuality, as well as Bach’s cantatas and the finest Iberian ham.

“He was that rare thing: not just the best player in the world but also the most beautiful, the most pleasing to watch, the grace note as well as the triumphant ending. This was not just a function of that strangely sensual presence, the way just walking out on to centre court could draw a kind of hormonal groan, a Federmones rush, a man who seemed to move more easily through the air.”

Ronay went on to say:

“His backhand was frankly ridiculous, overblown, hilariously good. This, one thought, watching that thing – the flex of the knee, the flourish of the wrist – is a kind of artefact, a European cultural treasure, like a Bach cantata or a complete acorn-fed Iberian ham, the kind of backhand a power-crazed Bond super villain might try to steal from its laser-guarded case.”

And this, about the man holding the racquet:

“Another remarkable Federer thing is just how unremarkable he is, a normal guy from a normal village who just happens to have this talent and this extraordinary sporting charisma; qualities that have existed only within those white lines and which will remain just as vivid.”

“Definitely the best I’ve seen in 50 years of watching tennis. The MGOAT! Most Graceful Of All Time. Moved like a panther on the court. Smooth, effortless, flowing, artistic game. I am going to miss him.”

“No matter the time, he was the only player that I would set the alarm, and watch.”

“The most naturally gifted human to ever pick up a racquet. That’s all really. All the best Fed.”

“I’ve been around since 1417 when I was bitten by a bat. During this long period Federer is the greatest tennis player I have ever seen.”

“Federer’s tennis should be reviewed on the culture pages, not the sports section. Enough said.”

“Federer at his best was like a fusion of ballet dancer and matador with a streak of ninja assassin thrown in. Classical grace, nerveless poise and ruthless killer instinct. How can something as physically and technically demanding as professional tennis look so damned easy. A phenomenal player.”

“I can cry like Roger, it’s just a shame I can’t play like him.” – Andy Murray, after losing to Federer in the Australian Open 2010’s final.

“What do you want me to do?” – Andy Murray shouted to his coaching team, after running out of ideas against Federer at Wimbledon 2015

“If somebody says I am better than Roger Federer, I think that person doesn’t know anything about tennis.” – Rafael Nadal

“Today I was playing my best tennis, trying lots of different things, but nothing worked. When you’re playing like that and he still comes up with all those great shots you really have to wonder if he’s even from the same planet.” – Novak Djokovic

“I don’t think, that you can always – you can ever – get your game to perfection, you know. Only if you’re Federer.” – Novak Djokovic

“If you poll the top 500 tennis guys in the world, about 499 are going to say Roger. The only o-ne who won’t is Roger himself because he’s too nice about it.” – James Blake

Interviewer: Last time, at Wimbledon, you said “Next time I may have to punch him.” Do you have a plan B?
Andy Roddick: Hit his face with a racket.

Interviewer: Do you feel like Federer is the guy everyone is chasing?
Roddick: Yeah basically nobody stands a chance against him.. maybe we should all join together, you know like Power Rangers or something.

”But there’s probably — I don’t think there’s anyone that hits the ball like that. Sure, if you take Roddick’s serve and Agassi’s returns and my volleys and Hewitt’s speed and tenacity, then you’ve probably got a good chance against Federer (laughter). That’s a lot of people involved in, you know, one player.” – Tim Henman

The legends of tennis

“He’s the most gifted player that I’ve ever seen in my life. I’ve seen a lot of people play. I’ve seen the (Rod) Lavers, I played against some of the great players – the Samprases, Beckers, Connors’, Borgs, you name it. This guy could be the greatest of all time. That, to me, says it all.” – John McEnroe, winner of 7 Grand Slams.

“He moves like a whisper and executes like a wrecking ball. It is simply impossible to explain how he does what he does. He is a class of his own.” – tennis coach Nick Bollettier

“Roger can produce tennis shots that should be declared illegal.” – Tracy Austin

“It’s amazing what sort of shots he can come up with from impossible positions. Yes, man he’s the greatest player in history.” – Rod Laver, the only player in the modern era to have claimed all four grand slam titles in a calendar year.

“For me Roger is the greatest player ever who played the tennis game. We are going to see so much more of Federer in the future, he is going to win more grand slam tournaments.” – Bjorn Borg, 11-time grand slam winner.

“The guy is the greatest male athlete of all time.” – Serena Williams

“I’d like to be in his shoes for one day to know what it feels like to play that way.” – Mats Wilander, winner of 6 Grand Slams.

In his own words – Roger on Roger

“There is no way around the hard work. Embrace it.”

“I fear no one, but respect everyone.”

“Once you find that peace, that place of peace and quiet, harmony and confidence, that’s when you start playing your best.”

“The more I lose, the more they believe they can beat me. But believing is not enough, you still have to beat me.”

“When I was 12 years old, I was just horrible. My parents were ashamed to watch my matches. I would play on a court at the local club and they would watch from the balcony. They would scream, ‘Be quiet’ to me and I would scream back, ‘Go and have a drink. Leave me alone.’ Then we would drive home in a very quiet car. No one speaking to each other.”

Une réponse à “First, there was tennis, then there was Roger”