If you follow the news, it’s quite easy to feel that we (humans) are sliding down the slippery slope. Conflict, war, disease, lies and propaganda dominate the feed. Children are not safe at school.

However, there is some positive news from one country, which you probably associate more with venomous spiders and snakes, sharks, forest fires and floods, adventure, surfing and AC/DC.

Last month, democracy called on Australia, as this wonderful, but delicate creature does every three years.

The result was resounding. Australians voted to end a decade of toxic politics. Enough was enough.

It was a vote for climate action, gender equality, integrity and accountability, the environment, indigenous Australians and better governance.

The 2022 election has altered the political landscape. The historic grip on power enjoyed by the two main political parties; the centre/left Labor Party (now the majority governing party) and the defeated conservative/right Liberal/National Party coalition can no longer be taken for granted.

It was hello to empowered grass root movements and a call for self-distancing from a tired binary and very male political culture.

It was also a vote against the Murdoch media conglomerate, which has poisoned civil debate around the world with its incessant stream of the lies, distortions and fearmongering.

What began as kitchen table chats in affluent suburbs in the larger cities of Melbourne, Sydney, Brisbane and Perth morphed into an enthusiastic movement of thousands, mostly women, who door-knocked thousands of homes

Where did votes go?  The winners were the Greens who polled 12 per cent across the nation and secured at least four seats in the Lower House. More telling was a new grass roots political movement that mobilised tens of thousands of volunteers in wealthy inner suburban electorates across the country. It was fuelled by anger and disillusionment, some of which related to misogyny and violence against women, a constant denial of climate change and the  catastrophes it has wrought on the country and  the terrible treatment of refugees.

What began as kitchen table chats in affluent suburbs in the larger cities of Melbourne, Sydney, Brisbane and Perth morphed into an enthusiastic movement of thousands, mostly women, who door-knocked thousands of homes.

The seat of Kooyong in Melbourne has always been a safe seat for the Liberal Party, the party of the establishment. The seat was held by the Treasurer, Josh Frydenberg, a moderate member of the Liberal party and a widely-tipped potential future leader.

These so-called moderates like Frydenberg were locked into a pro-fossil fuel and coal industry policy which was either opposed to climate action and alternative energy or played reluctant lip service.

Independent, Dr Monique Ryan, a neurologist, achieved the unthinkable, deposing one of Australia’s most prominent politicians.

She was one of 23 independents backed by grassroot volunteers and the Climate 200 group. This group, led by a wealthy businessmen, funded and resourced independent candidates who made climate action, political integrity and gender equality the main planks of their campaign. In the end, six independent women candidates won their contests. In all the Liberal Party lost 18 seats and the Labor Party gained 8. Counting continues in a few close seats but, as of yesterday,  the Labor Party will have majority of at least two.

The new Prime Minister Anthony Albanese is no Trump or Berlusconi. He was raised by his single mother on a disability pension in public housing. He was the first in his family to finish school and the first to graduate from university. He’s humble and hard-working. 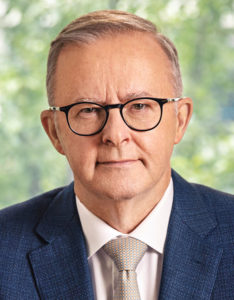 The first words in his victory speech were for indigenous Australians. “Albo” affirmed the Government would go ahead with the Uluru Statement from the Heart which will give Aboriginal Australians a voice in Parliament.

Albanese is the first Australian PM with a non-Anglo name. His Italian father died in a car accident shortly after he married his mother. He was 14 when his mother revealed his father was, in fact, still alive. You can read the extraordinary account here.

Among the Labor party winners was a former Malaysian monk and dolphin trainer, Sam Lim who grew up in poverty before migrating to Australia.

Another winner are refugees who have been held in detention for upwards of eight years. One refugee family, known as “the Biloela family”,  will finally taste freedom. Both their children were born in Australia and lived their lives in detention.

Sick and shameful culture in the highest office in the land

In Australia you can’t see climate change. There’s too much smoke.