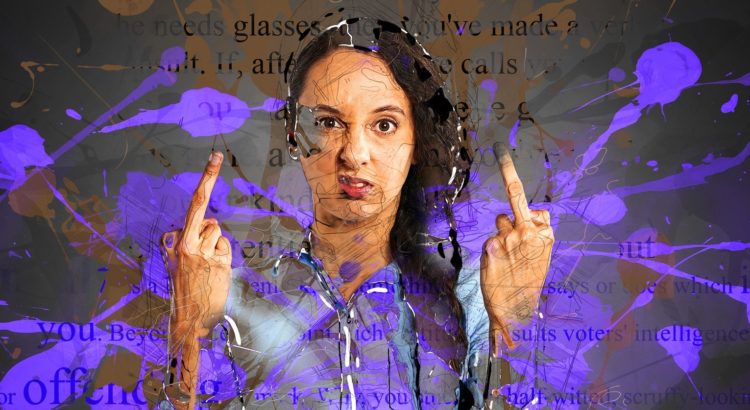 My mother was a most polite woman. Her language was always temperate. She rarely lost her temper. However, if someone or something did make her blood boil (made her very angry) she was likely to exclaim:

Pardon my French, but I think he’s a damn idiot!

Pardon my French, but that’s the stupidest thing I’ve heard for a long time!

It is important to note here that despite apologising for her use of the Gallic language (pardon my French), my mother did not speak French, apart from a few muddied phrases from her school days. You might also notice that neither of the above phrases contain any French language. Weird, isn’t it?

What’s clear is that the French language (and its people) were closely linked with some uncouth (rude), wicked and immoral language and behaviour. French was the language of swearing and dirty dancing and should be prefaced with an apology.

Only the loose-tongued French could equate “being lucky” with “having an arse lined with noodles” (avoir le cul bordé de nouilles) and “living in luxury” with “farting in silk” (péter dans la soie) … Pardon my French.

When they weren’t fighting, the French and English were occasionally trading (mostly insults).

“I fart in your general direction! Your mother was a hamster and your father smelt of elderberries!”

The 1975 film Monty Python and the Holy Grail gave us an over-the-top glimpse.

“I don’t want to talk to you no more, you empty-headed animal food trough wiper! I fart in your general direction! Your mother was a hamster and your father smelt of elderberries!”

Today much of France has been colonised by older wealthy Brits. At worst it’s a polite food fight over the English Channel (La Manche): The frogs versus les rosbifs.

Before you get on your high horse and defend the French, please note that these historic insults were all very tit-for-tat.

The expression to take French leave also exists in French with one small, but important change – filer à l’anglaise.

Likewise, a French letter is a capote anglaise and the French disease was also known as la maladie anglaise. (The Arabs called it the Christian disease and depending where your invaders came from, it was also known as the Italian, Spanish, German and Polish disease ) .

The Simpsons cartoon series came up with a new and vivid crudity for the French in 1995: “Cheese-eating surrender monkeys” (singes capitulards bouffeurs de fromage). Pardon my French.

The phrase pardon my French can be traced back to educated classes in the 1800s.

Bless me, how fat you have grown! Absolutely as round as a ball: – you will soon be as enbon-point, excuse my French, as your poor dear father, the major – The Lady’s Magazine, 1830

Some linguists claim that pardon my French had little to do with insults. They argue that educated English people liked to drop French expressions into a conversation. They would use the phrase to modestly apologise for these Gallic references, as many of their listeners were unfamiliar with the language.

“…and thirdly, you must hate a Frenchman, as you do the devil”

However, this theory is unlikely. In the early 19th century Napoleon was on the warpath and all things French were considered bad taste and should be apologised for in the same breath.

The French revolution of 1789 scared the living daylights out of the British ruling class. Then came the Napoleonic wars. 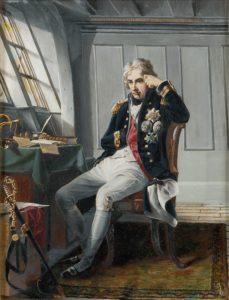 Vice Admiral Horatio Nelson : An arm lost to the Spanish and little love lost for the French

Vice Admiral Horatio Nelson was quite clear when giving advice to to his naval crews:

There are three things, young gentlemen, which you are constantly to bear in mind. Firstly, you must always implicitly obey orders . . . Secondly, you must consider every man your enemy who speaks ill of your king; and thirdly, you must hate a Frenchman, as you do the devil.

All things French were considered bad taste and should be apologised for in the same breath.

From there it evolved into a more general apology, please forgive me for my rude language as Jim Carey demonstrates so eloquently in the film I Love you Phillip Morris (2009). Please pardon his obscene French. Not for those with fragile ears.

In the film Ferris Bueller’s Day Off, the main character describes his best friend Cameron:

“Pardon my French, but Cameron is so tight that if you stuck a lump of coal up his ass, in two weeks you’d have a diamond.”

The above article is a modified version of an article published on the Bilan magazine website in 2014.

5 réponses à “Pardon my French, I am going to be rude”