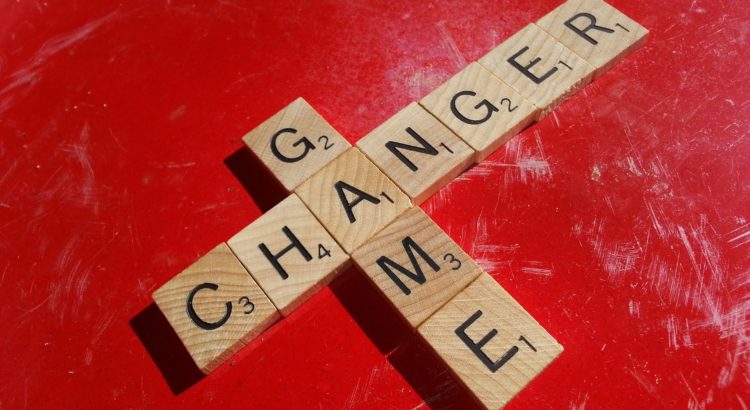 By David Creber Senior Trainer at The Language House

It’s time to get out your old Scrabble board from the back of the wardrobe.

Now, throw it away. In fact, you can burn it, because there’s a new word game in town.

It’s the infectious phenomenon called Wordle, a web-based game developed by Josh Wardle. Wordle by Wardle. Twitter has identified it as the first major viral trend of 2022.

Wordle is unlike most modern-day website games. It makes you think. A fresh word challenge is released daily and there are no adverts, in-game purchases or levels to unlock. It’s plain and simple and very addictive. Unlike Scrabble, you won’t lose an hour or two.  Five minutes with Wordle is enough to awaken the language endorphins. In fact, it is so popular that it has already spawned several copycat games, including the anti-Wordle known as Absurdle and the profanity-laden Sweardle. There’s even Primel, which uses numbers rather than letters.

Wardle, a British artist/engineer living in New York, invented the game for his partner – a gift of words and a gift of love. His goal was to make something fun, simple and addictive. He definitely achieved his goals. It’s fast, easy to understand, and possible to play on your telephone on the bus to work. And even if English isn’t your mother tongue, it’s a great way to enrich your word power.

And even if English isn’t your mother tongue, it’s a great way to enrich your word power

If you have a B2 level or higher you can probably get the word within the limit of six guesses. At The Language House in Geneva, we’ve often got the word in three guesses. One of our team managed to find the word in just two guesses but our average is four. Our mornings often start with a coffee and a quick Wordle analysis.

So, over to you. Whether you have caught the Wordle bug yet or not, let’s see if you can get today’s word in four guesses or less. Share your results with your friends to show how brainy you are, and why not post your results in the comments below as well?

Here is how it works

The objective is to identify a five-letter word within a minimum number of guesses. After each guess, the game uses green, yellow and grey squares to tell you which letters are wrong, right, or right but in the wrong place. 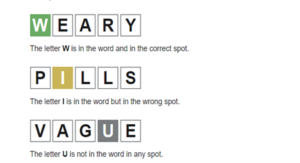 Here’s an example of a finished Worldle: 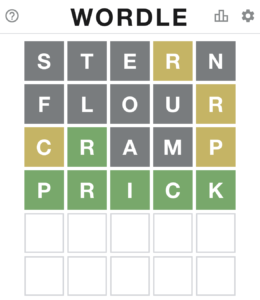 In Wordle there’s no more need for seven-letter ‘bingos’, triple-word scores or weird two-letter words of which we have never known the exact meaning. You just need to be able to think of lots of five letter words.

Wordle uses a list of 2,315 common words. Nothing too obscure. You can find them in this list. In fact, these words are probably very important for any English speaker to know and be able to use. So start wordling now…

It is addictive. You can take my Wordle for it.

2 réponses à “Wordle is addictive. You can take our Wordle for it.”