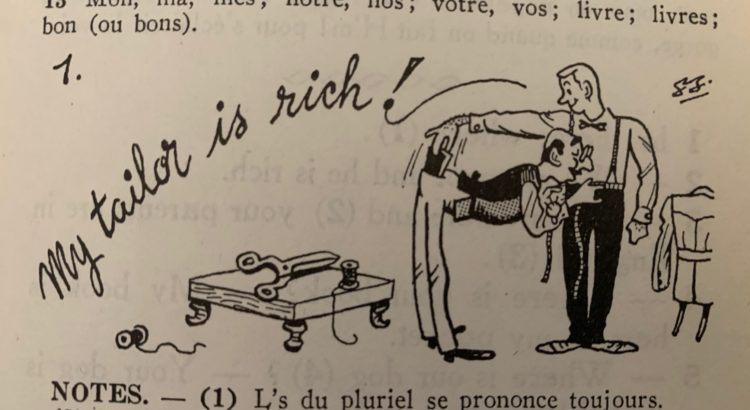 (Where is Brian? Learning English. B2+)

It’s a question that has traumatised millions of French people learning to speak English.

The answer is more architectural than philosophical. We all know Brian is in the kitchen. For many English learners who never got past the first lesson, Brian is still in the kitchen. Forever in the kitchen. His sister Jenny, however, prefers the bathroom. Brian does get to wander into different rooms if students continue to turn the pages of Speak English 6éme (for children in the first year of secondary school), first published in 1972 and popular throughout the 1980s in French schools. 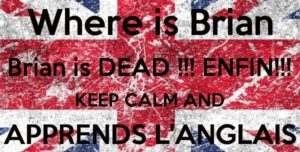 There is another weird piece of language that has embedded itself in the minds of generations of French speakers learning English:

My tailor is rich

My tailor is rich, (but my English is poor) was in lesson one of the Assimil method of L’anglais sans Peine, (English without Toil) first published in 1929.  It was also the very first spoken phrase in the first Assimil L’anglais sans Peine vinyl record released in the 1960s.

This was lesson one. Page 2.

Your cigarette is not finished.

Our doctor is not good.

Your flowers are not beautiful. 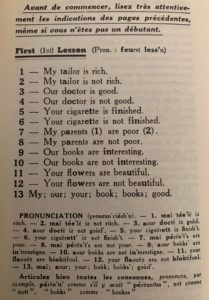 The phrase ‘ma tehya eez reesh’‘ (my tailor is rich) even appears in the French–dubbed version of the horror film The Exorcist (NB: not for the weak-hearted). A giggle amongst the horror.

The catchy phrase appears in the Astérix chez les Bretons comic book. It is the name of a musical group and the title of an album released by the Belgian group The Vogues.

It became a household term thanks to slapstick comedian Louis de Funès in the film Le Gendarme à New York released in 1965.

The programme Karambolage on Arte  made this linguistic homage to my tailor is rich in 2010.

Pretty weird!  These banal phrases have been scarily imprinted into the memory banks of many would-be English speakers.

They are neither the simplest, nor the most practical phrases to slip into a conversation, despite being lesson one, exercise one of two popular English learning methods developed for French speakers.

Likewise, English speakers learning French are armed with equally brilliant first-lesson phrases such as le singe est sur la branche (the monkey is on the branch), le chat est sur la chaise (the cat is on the chair), and la souris est en dessous de la table (the mouse is under the table).

These are challenging phrases for English tourists. There’s not a lot of jungle in France and monkeys are rare in Paris. The UK comedian-actor-activist and executive transvestite (travesti executif), Eddie Izzard, explains (with some swearing):

Finally, here’s a song dedicated to Brian, forever in the kitchen. It was a pop hit, later used by IKEA to great success.

Man Like Me – You’ll Always Find Me In The Kitchen At Parties (written by and first performed by Jona Lewie, who appears in the video)

6 réponses à “My tailor is rich. Where is Brian?”