It was a film you either loved or hated.

Holy Motors (2012), from French director Leos Carax divided the critics. But almost all were in awe of the performance of French actor Denis Lavant as the chameleonic Mr Oscar. This month, the esteemed film critic of The New Yorker Richard Brody, published an article titled the Best Movies Performances Of The Century So Far. Brody ranked Lavant’s Mr Oscar as the fourth greatest performance of the century so far…

Lavant has one of French cinema’s most instantly recognisable faces – a real sacrée gueule.

You may not know his name, but you will know the pock marks, scars, crevices and wrinkles that plough his face. You’ve probably seen them in the sewers of Paris with Lino Ventura and breathing fire on le Pont-Neuf with Juliette Binoche.

In February 2014, I ran into Denis Lavant in a sandwich shop in Bd Georges-Favon, Geneva. Panini ordered. And there he was. Right in front of me. It’s Denis Lavant, the unmistakable, in a rumpled Chaplinesque suit and green woollen hat with dangling pom-poms reminiscent of those worn by Moliere’s bedridden hypochondriacs.

Everything is imprinted on my face – all the scars and joy. It doesn’t hide. It reveals. In Paris people often look at me with distrust.

A few days earlier I had watched, for the second time, the extraordinary Mr Oscar, an actor who travels Paris at night in the back of a long white limousine full of props, wigs, costumes, prosthetics, make up and a dressing room mirror, transforming himself into 10 wildly different characters, including the diabolical Monsieur Merde who kidnaps Eva Mendes from a fashion photo shoot in a cemetery and takes her down into his lair in the pungent sewers (égouts) of Paris, where in a state of sexual excitement, eats her hair as she sings lullabies to him.

The next day, armed with fresh sandwiches, we met for an interview.

Subscribe to our blog. Leave your email address (right-hand side column) and confirm your subscription when you receive our email

It is one of French cinema’s most enigmatic relationships.

DL: It’s a strange relationship. I don’t really understand it. I provoke something in him. I thought our first film together Boy Meets Girls was a sort of failure. Then two years later Leos contacted me and says he has a new film and he has written the main role for me. Thirty years later we are still making films together.

Leos is a year older. He is like my big brother. I am his muse (laughs). I am the conduit for his vision. We often don’t speak a lot about the film. He gives me the script and I try to find a scene which I can relate to and start to build a character. It is often only when I get to see the film at the end that I discover the poetry in his imagination.

Holy Motors was filmed over just two and half months. Lavant’s characters include a captain of industry, assassin, beggar woman, monster and family man.  It took three make-up assistants five hours to construct some of the characters.

Some critics cried Bonkers! (crazy), but most cried weird, wonderful, wayward, rich, strange and  surreal, and several deemed Holy Motors the best film of the year. 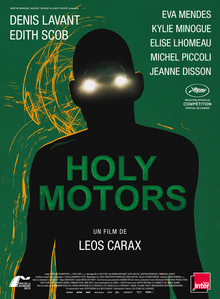 While Carax is reclusive and media shy, Denis Lavant, is a talkative effusive ball of eccentric energy.

He is a physical actor; small, wiry and wired. Theatre is his great passion, but the camera loves the topography of his furrowed and pock-marked face, bushy eyebrows and wispy wild hair.

DL: It’s a sacrée gueule, sculptured by work and life. Everything is imprinted on my face – all the scars and joy. It doesn’t hide. It reveals. In Paris people often look at me with distrust. In bookshops they look at me as if I have stolen a book (laughs). But when I speak it calms their perceptions of my appearance.

His characters live in life’s margins on the streets and in the lanes and alleyways and bridges; running, dancing, staggering and breathing fire.

DL: At the age of thirteen I started walking on my hands, learning acrobatics, riding a mono cycle and juggling. Motion was my poetry. I wanted to live in motion. I wanted to walk into the classroom on my hands. I was inspired by the work of Marcel Marceau, Buster Keaton, Harpo Marx and, of course, Charlie Chaplin, whose early work was totally punk, a real anarchist. I loved it.

I began studying drama and acting but the passive reading of classic texts left me curiously cold, and after a year I dropped out and joined a Belgium street circus.

In several films Lavant leaves the streets and descends into the underworld of the sewers.

We are both monsters. We understand each other. She is also a monster; a monstrous star and model of monstrous beauty.

He first played in the sewers as Montparnasse, the young vagabond turned assassin in Les Miserables (Lino Ventura 1982). In this case ‘the sewer’ was a theatrical set shared with 100 rats.

DL: In Holy Motors we shot part of the film in the actual sewers of Paris. They are massive. The stench was incredible and you could see the debris and tracks of the illegal immigrants who traverse the city.

The underground gnome, Monsieur Merde first appears in the film Tokyo! and resurfaces from the subterranean sewers in Holy Motors; blazing red hair, blind in one eye, long gnarly nails, his own gibberish language, and an appetite for bank notes, flowers, fingers and the goddess-like Eva Mendes who he carries over his shoulder down into the sewers.

DL: There is a strange complicity between the two of us as we lie together amid the stench. We are both monsters. We understand each other. She is also a monster; a monstrous star and model of monstrous beauty.

Carax, speaking about Lavant at Cannes in 2012, said:

I don’t think there are many actors of this generation that can portray such a creature. Maybe Lon Chaney or Peter Lorre or Chaplin, but not that many actors today—and Denis is one. So I’m lucky to have him.

I’ve known him since he was 20 years old, and I kind of know what he’s able to do, and I kind of know how to drive him someplace. Of course, he’s special in many ways, but one way is that he’s both a dancer and a sculpture: he’s good at physically moving, but he’s also very solid. You can just put him on a chair and film him for twenty minutes.

Lavant says Carax is his captain on the film set.

DL: When you make or shoot a film it’s like going out to sea on a boat and you have to trust the captain because you know that you might face a storm or rocks. With Leos, it’s not always an easy journey.

Les Amants du Pont Neuf was a perilous voyage.  At the instigation of Carax, Lavant  prepared for the role of Alex the homeless fire eater, by spending three vodka-soaked days and nights in the streets of Paris. It was an ominous beginning. The film took three years to finish. It went way over budget.

DL: It was a nightmare, a real catastrophe. At times I feared for my mental well-being. Leos created a kind of Actors Studio dedicated to life and misery on the street. We suffered. We drank. We tried to find the truth.

Leos wanted to open people’s eyes to the suffering of the homeless in Paris. He pushed us so hard, that I went into auto-destruction mode. It is very disturbing to live in squalor. It’s a black spiral. The only way is down.

I was completely lost and depressed, no longer an actor, wondering what I was doing there

There was a time when we totally lost sight of our goals and we could no longer understand what was real, what was fiction, and what was the aim of the characters. It was a true madness.

In one scene I was watching Juliette Binoche’s character washing herself in the park and I was completely lost and depressed, no longer an actor, wondering what I was doing there. When Leos watched the rushes of the scene that night he said me: Look! Look at your face! That’s perfect! (he jumps up laughing and claps his hands). That’s our relationship – a dual perspective (laughing).

Denis Lavant appears in the Philippe Lacôte film,  Night of the Kings, to be released this year

You can read Richard Brody’s 30 standout performances of the 21 st century here.

The above article is a modified version an interview first published on the Bilan magazine website.