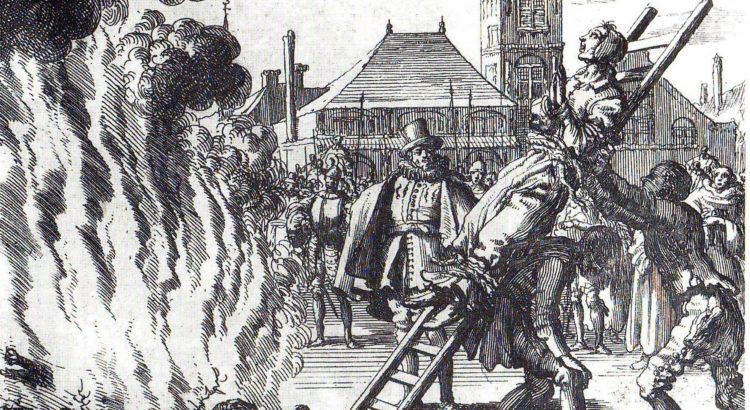 Most of you will come face-to-face with a witch in the next week or so.

Relax. These boisterous young esprits, in their ill-fitting, badly-stapled, black-pointed paper hats, will not demand your soul, or that you dance with the devil, but just ask you to fill their bags with bonbons and coins.

There’s no need to round them up and burn them in the stairwell.  Your Swiss ancestors, however, bless their superstitious souls, were rather good at torturing and burning women in the name of witchcraft.

Switzerland has a terrible legacy. It is where witch hunts began and where the last woman was beheaded for sorcery in Europe.

Someone was to blame. In the dank village in the cold mountains, scapegoats for this succession of mischance were never too far away.

The cantons of Valais and Vaud executed some 3,500 people, more than anywhere else in Europe per head of population. In just the first three months of the year 1515, authorities in Geneva burned 500 people, mostly women, at the stake. Do your maths; that’s more than five a day.

From here, the pyres were lit through Germany, Spain and rest of Europe right up to 1782 when Anna Goeldi, a maid from the Canton Glarus,  was executed after confessing, under torture, to conversing with the devil and poisoning the daughter of the house.

The first trials began in the Valais in 1428. How did they start? Perhaps a cow gave birth to a stillborn calf and last year’s wine turned to vinegar. Someone was to blame. In a dank cold village, cursed by hunger, scapegoats for this succession of mischance were never too far away.

The neighbour’s fifth child is born with a hunchback, the Wohlen daughter is cross-eyed, the widow Busch has developed a limp and mumbles when she walks and old Grunwald has stopped washing himself and has been seen walking into the night with a lantern on a full moon.

Stories, perhaps like these imagined above, began to fester across the countryside until sufficient pressure forced the authorities in Leuk in the Valais to establish formal witch trial proceedings. They became known as the werewolf witch trials.

There are very few surviving documents, but we do know about 370 people were killed; absolutely mind-boggling when you think that only 20 people perished in the infamous Salem witch trials.

The werewolf witch trials accused the so-called witches of fantastic and horrible offenses:

A short account of the trial was written by Johannes Fründ a trial clerk from Lucerne.

…the “public talk or slander of three or four neighbours” was enough for arrest and imprisonment, even if the accused was a member of the nobility.

Rules of the witch trials

The trial proceedings were new, but witchcraft was nothing out of the ordinary. Witches had been discovered and burnt since the late 14th century in the region.

There were rules and regulations to follow. For example, the “public talk or slander of three or four neighbours” was enough for arrest and imprisonment, even if the accused was a member of the nobility. The use of torture was reserved for victims “slandered by five, six, or seven or more persons, up to the number of ten, who were qualified to do so and not under suspicion themselves”, but also those “accused by three persons who had been tried and sentenced to death for the practice of sorcery”.

It is interesting to note that about two thirds of the victims were male and one third female. This ratio changed radically as witch trials gathered momentum across Europe.

Prestigious works such as Formicarius, written by Johannes Nider and printed in 1475, stated with great authority that witches were uneducated and more commonly female. Nider explained that females were capable of such acts by pointing out what he considered their inferior physical, mental and moral capacity

Historians call this period, from 1500 to 1660, The Burning Times which claimed the lives of between 60,000 and 80,000 – the great majority women. Of the men who died, most were linked to an accused woman by marriage or blood. In Salem, 14 of the 19 people found guilty of, and executed for witchcraft, were women.

Werewolf trials were relatively rare. A werewolf is a human that takes the form of a wolf during the full moon and feasts upon the heart of humans and other animals. People could be transformed into ‘shapeshifters’ if bitten by a werewolf or by drinking rainwater out of the footprint of a wolf. 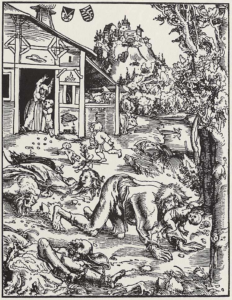 Those accused in the trials of flying and plundering wine cellars did not use thatched brooms, but according to Fründ’s record they would apply a salve (cream) to their chairs, and then ride the chairs wherever they wanted, and would meet in people’s cellars at night and drink their wine.

Fründ speaks of a conspiracy of 700 witches in Valais during numerous trials that lasted, on and off, for about six years.

From Valais the phenomenon spread to Vaud and then Fribourg, Neuchatel and throughout Europe.

“And no matter how severely they were questioned, during more and more torture, many would not confess but let themselves be tortured. So they died from it, and were all the same judged and burned, some alive and some dead.”

Once a person was accused of witchcraft three times, they were arrested. Once arrested, there was no way to escape; those that confessed were burned at the stake and those who didn’t were tortured until they did confess. A significant number did not confess and died of torture.

In the chilling words of Mr Fründ:

“And no matter how severely they were questioned, during more and more torture, many would not confess but let themselves be tortured. So they died from it, and were all the same judged and burned, some alive and some dead.”

Torture was delivered enthusiastically in its most barbaric form which almost always guaranteed convictions.

One of the cruelest tests to determine whether or not one was a witch was the so-called “swimming test.” The accused were tied up and thrown into the water. Those who sank and drowned were deemed innocent, while those who managed to break free and swim to the top were proven to be witches who had been helped by the devil. 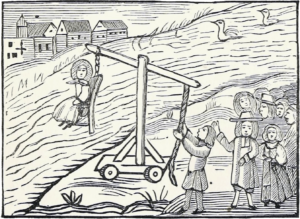 The “accused” were also also hung by the wrists from behind, or stretched on a frame to the point of having multiple muscles and tendons dislodged and ripped. To put an end to the horrific pain of the tortures, the “accused” in most cases would eventually confess, which would seal her or his fate. The wretched  innocent would often seek clemency by accusing others of wild and fantastic crimes.

The last witch of Switzerland

Europe’s last witch – beheaded for sorcery – was a maid in the small alpine region of Glarus. Switzerland.  Anna Goeldi was executed in 1782 after she confessed, under torture,  to conversing with the devil and poisoning the daughter of the house.

Of course, she wasn’t a witch just like the tens of thousands of innocent people killed before her.  Anna Goeldi worked for the family of a rich married politician, who may have sexually assaulted her and then denounced her to protect his reputation. He claimed she fed his daughter pins.

In 2007, the Swiss parliament acknowledged Anna Goeldi’s case as a miscarriage of justice. She was exonerated 226 years after her death on the grounds that she had been subjected to an “illegal trial”.

The term’ witch’ is a conundrum. It is being re-appropriated by women today, much like African Americans have reclaimed the term ‘nigger’. 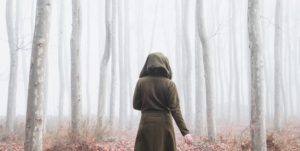 Noami Fry of The New Yorker wrote about women who identify as witches:

’The witch is often understood as a mishmash of sometimes contradictory clichés: sexually forthright but psychologically mysterious; threatening and haggish but irresistibly seductive; a kooky believer in cultish mumbo-jumbo and a canny she-devil; a sophisticated holder of arcane spiritual knowledge and a corporeal being who is no thought and all instinct. Even more recently, the witch has entered the Zeitgeist as a figure akin to the so-called nasty woman, who—in the face of a Presidential Administration that is quick to cast any criticism as a “witch hunt”—has reclaimed the term for the feminist resistance. (This latter-day witchiness has often been corralled to commercial ends: an Urban Outfitters shirt bearing the words “Boss Ass Witch,” say, or the women-only co-working space the Wing referring to itself as a “coven.”) The muddled stereotypes that surround witches nowadays are, in the end, not so very different from those used to define that perennial problem: woman.’ost