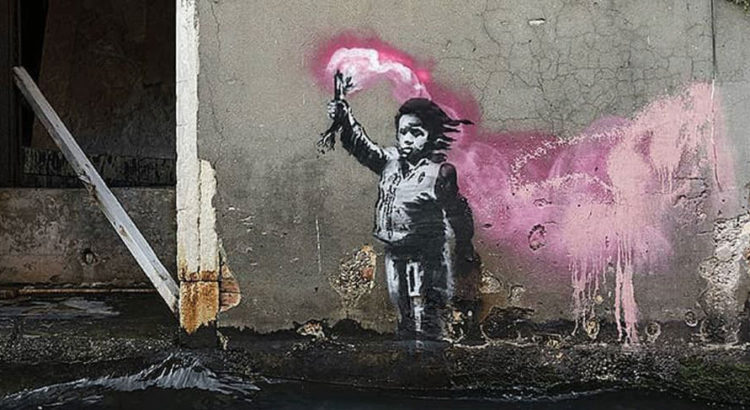 Who is the graffitist/provocateur/collective known as Banksy?

Who cares? In fact, I wish the plague upon those so-called reporters who want to unmask Banksy.

Let’s just say he’s probably from Bristol in the UK and has been linked with the cult music group/collective Massive Attack. The latter is definitely cool.

We can also say he’s got money in the bank. His ‘tribute’ to the impressionist Claude Monet will be auctioned online next month and is expected to fetch between £3 and £5 million. The painting, called Show me the Monet, features Monet’s water lilies as well as two half-submerged shopping trolleys.

We can also say the Brits love him. Banksy was last year voted the UK’s most popular artist, ahead of Claude Monet (minus the shopping trolleys) and Vincent Van Gogh (minus the ear).

Here are 10 of the best of Banksy. If we have left out any of your favorites, let us know in the comments below. You might want to listen to Teardrop by Massive Attack as you scroll down:

A Banksy 10-room hotel which gets just 25 minutes of direct sunlight a day. Why? Because it is right next to the massive barrier wall separating Israel from the Palestinian territories. The West Bank’s answer to the Waldorf.

Or you may prefer the presidential suite:

“This palatial suite is equipped with everything a corrupt head of state would need – a plunge bath able to accommodate up to four revelers, original artwork, library, home cinema, roof garden, tiki bar and a water feature made from a bullet riddled water tank. Comes with a complete set of Dead Sea bath minerals and an in-room dining service available upon request.” 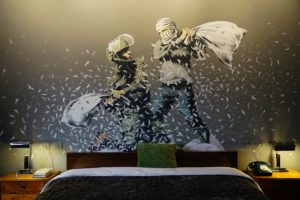 Room with a view in the Banksy hotel.

Moments after Balloon Girl was sold for $1.4 million in a Sotheby’s auction, it promptly shredded itself. You can watch Banksy’s version of events. What is a set-up? Maybe… but what a razor sharp piece of theatre. The piece probably doubled in value with a good shredding. Balloon Girl first appeared on a wall and depicts a young girl losing a heart-shaped balloon in a gust of wind. There is also a small quote etched into a nearby  staircase that reads, “There is always hope…” 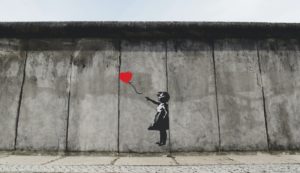 Switzerland also has a history of art destruction. In 1960, Swiss artist Jean Tinguely’s Homage to New York went up in smoke in the garden at the Museum of Modern Art in New York. Tinguely was fined for violating the city’s fire laws.

Screaming and squeaking stuffed animals travel on a truck in New York on the way to the abattoirs.  Hilarious, cute and horrifying.

The subject appears to be involved in a riot, wears a handkerchief and backwards cap and is armed with a bouquet of flowers, instead of a Molotov cocktail. The complete work was created in black and white, except the flowers, which were in colour. 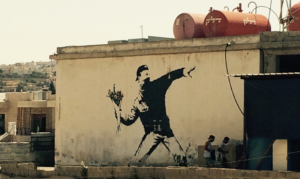 The flower thrower copied on a wall in the Westbank

Banksy donated this painting to England’s Southampton General Hospital in an effort to raise the spirits of medical professionals working on the front lines of the corona virus pandemic.

The painting shows a young boy playing with a superhero doll dressed as a nurse, wearing a mask, cape and apron bearing the Red Cross symbol. A bin next to the child contains superhero rejects, Spider–Man and Batman.

The artist left a note with the work titled Game Changer:

“Thanks for all you’re doing. I hope this brightens the place up a bit, even if its only black and white.”

The piece first appeared a graffiti on a wall in north London in 2012. Then the wall disappeared. It reappeared at an auction in Miami with a price tag of $500,000. After a public outcry the work was withdrawn. It returned to the UK and was sold for £750,000 then sold again in the US for about £560,000 to an artist who vowed to paint over it as a protest against the buying the selling of street art. 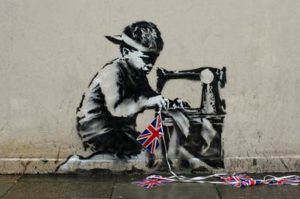 Banksy’s Di-Faced Tenner replaces an image of Queen Elizabeth II with that of Princess Diana, issued by the “Banksy of England.” The bank note also proclaims: “Trust no one.”

Banksy rained the bills down on crowds of people at the Notting Hill and Reading Festivals, and “spilled” a briefcase full of the bills at the Liverpool tube station in London at rush hour. The British Museum acquired a Di-Faced Tenner bill in 2019, where it joined the coins and metals collection. 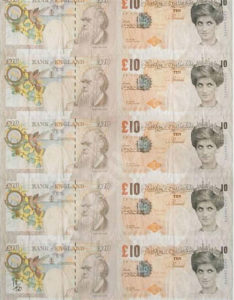 Kissing Coppers, a life-size black-and-white street work of two policemen kissing, was stenciled onto a pub wall in Brighton. The work was vandalized and later removed and sold in Miami for $575,000 in 2014. 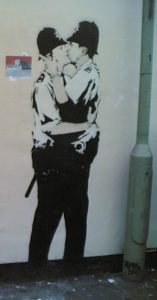 In 2010, this Banksy appeared in Chinatown in Boston, Massachusetts. The image featured a tired-looking painter standing next to the seemingly painted on word, “FOLLOW YOUR DREAMS” stamped with an official ‘cancelled’. 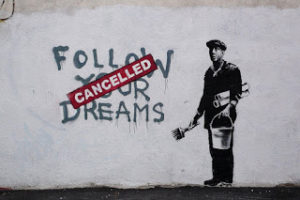 10. The bullet-proof vest worn by Stormzy

This customised body-armour can stop bullets and is also stab proof, yet not machine washable. One size only.

As worn by UK grime artist Stormzy at the Glastonbury festival .

Here’s Stormzy is his Banksy.

Here’s a little more from Stormzy, minus the vest: Blinded by your Grace PT.2 FT. MNEK