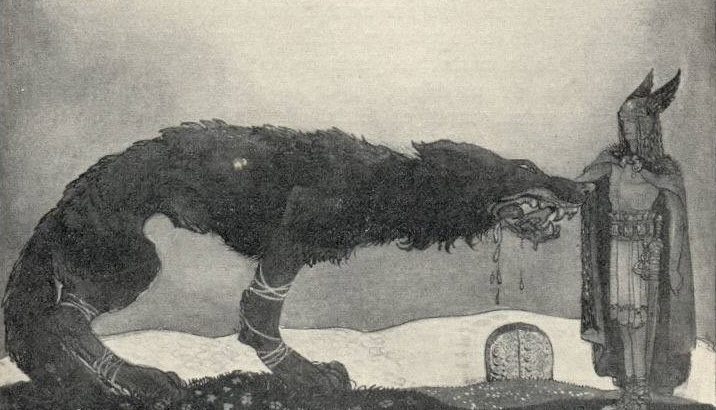 Every day, we unknowingly organise our lives around a handful of ancient gods of war, thunder, wisdom, motherhood and various celestial bodies. Every day and many times a day.

In English, most of the names of days of the week are monopolised by a close-knit group of Gods. In fact, Friday was married to Wednesday.  I bet you didn’t know that Tuesday lost his hand to a ferocious wolf who was later killed by the son of Wednesday.

You better think twice when you open your Outlook calendar in search of auspicious meeting time.

In many languages the days of the week can be traced back to the planets in Hellenistic astrology. In the case of English, these names were substituted with names of Nordic (Germanic) gods. Yes, we are talking Vikings here.

Friday was married to Wednesday.

Tuesday lost his hand to a ferocious wolf

who was later killed by the son of Wednesday.

German gods have their roots in old English or Anglo-Saxon which date back to the fifth century or the early Middle Ages.

A Thursday appointment with the dentist is a reference to Thor, the Norse God of Thunder. Thor rides a chariot drawn by goats and wields the hammer Miölnir. He is the defender of the Norse gods and destined to kill and be killed by the ferocious Midgard Serpent who makes the Loch Ness monster look like an earth worm.

In the next Thor film we would like to see Chris Hemsworth (below) on a goat. 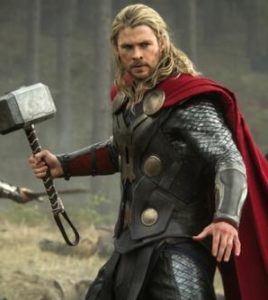 Think of Thorsday at the dentist, and you should think of the real Thor and his goats and hammer (below). Ouch! You are likely to leave with more than a toothache. Better to reschedule. 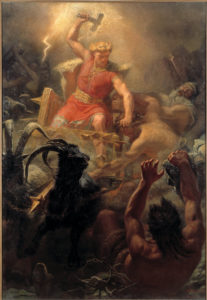 Let’s check what’s happening during the rest of the week:

Monday is the day of the moon just like lundi.

Tuesday come from Týr, the Nordic god of war, similar to the Roman war god Mars (mardi). By the way, he had only one hand. In Norse mythology, Týr sacrificed his hand to the monstrous wolf Fenrir (see photo at the top of the page). Fenrir was killed by the son of Odin, also known as Woden, who gives us Wednesday. It’s a small world in the higher realms. 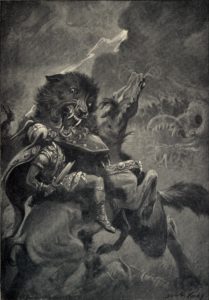 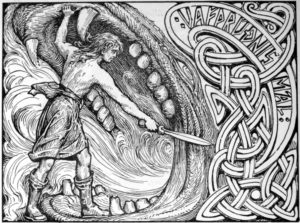 The death of Fenrir, killed by by the son of Woden (Wednesday)

A Woden’s day, or Wednesday appointment at the dentist will probably be more auspicious.

Odin or Woden is a widely revered god in Germanic mythology. He is associated with wisdom, healing, royalty, death, knowledge, war, battle, victory, sorcery and culture. He is also the supreme deity and creator of the cosmos and humans. That’s quite a resume. Busy chap. Odin (Roman) became Woden in old English, hence Woden’s day (Wednesday).

Woden is one-eyed and long-bearded, and carries a spear named Gungnir, made by dwarfs and wears a cloak and a broad hat. He’s very Gandalf-like.

Woden is the husband of the goddess Frigg (Friday), but more about her later…

Thursday is Thor and thunder.

Friday is a great day. Thank God it is Friggday!  As you leave the office, you should think of Frigg, the German goddess associated with foresight and wisdom, marriage, and motherhood. The Norse name for the planet Venus (vendredi) is Friggjatstjarn (Frigg’s star). 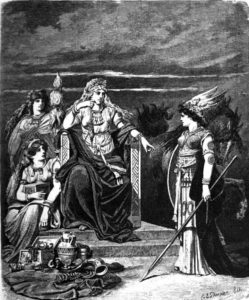 And Saturday comes from the planet Saturn.

Saturn is the Roman god of agriculture. He is said to have ruled the earth during an age of happiness and virtue, which sound a like a perfect way to start the weekend.

Sunday is self-explanatory – the day of sun from the ancient Romans.

Whew! That quite a week. I think I need a lie down.