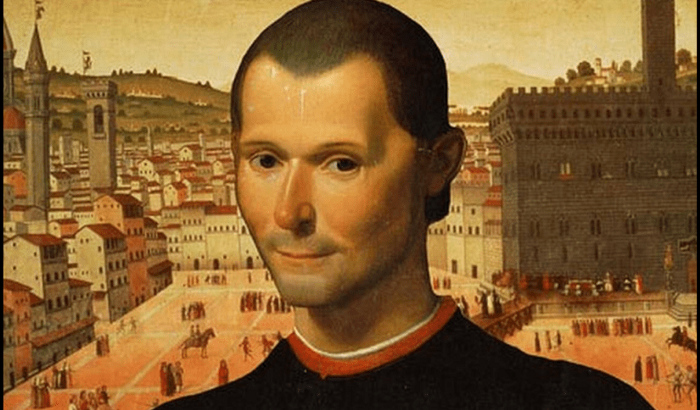 (English reading and vocabulary related to Machiavelli and politics)

Written and compiled  by Benedicte Gravrand, English trainer at The Language House

Is it better for a ruler – or a president, or a prince –  to be feared or to be loved?

According to Machiavelli, it is better to be feared than loved; a ruler must not only care about reputation, but also must be willing to act unscrupulously at the right times. A loved ruler maintains authority by obligation while a feared leader rules by fear of punishment.

“Since love and fear can hardly exist together, if we must choose between them, it is far safer to be feared than loved,” Machiavelli wrote in The Prince.

Check the meaning of the words in bold. See vocabulary exercise below.

Niccolò di Bernardo dei Machiavelli was an Italian Renaissance diplomat, philosopher and writer, best known for a brief political essay The Prince, written in 1523, published in 1532. The book was about how to win power and how to keep it.

His name has entered the dictionary: If you describe someone as Machiavellian, you are critical of them because they often make clever and secret plans to achieve their aims and are not honest with people. The word can be used as a noun: a Machiavellian is a cunning, amoral, and opportunist person, especially a politician.

It is almost impossible to be both a good politician and a good person (in the Christian sense) at the same time, says Machiavelli.

To subscribe to our blog, leave your email address (right-hand side column)

and confirm your subscription when you receive our email

So there is a divide between Christian morality and the world of power:  Christian virtues have no place in politics. Rulers must leave aside any scruples in order to be effective.

Machiavelli does not recommend immorality; he recommends pragmatism.

“How we live is so different from how we should live that he who studies what should be done rather than what is done will learn the way to his downfall rather than to his preservation,” he wrote in The Prince.

We want our politicians to be good and honest. But good politicians must have the power of the lion and the cleverness of the fox, he says.

It is up to citizens

Everyone faces “difficult decisions” in life. These decisions may be difficult because they conflict with our moral codes. Should we be nice or should we be effective (i.e., not necessarily be nice at all)? Should we deal with the world as it is, or as it should be? In the real world, the wicked tend to win: they can disregard moral codes in order to get what they want. They can lie, intimidate, deceive. We should learn to at least understand them.

Erica Benner, a professor of political philosophy at Yale, recently published a book called Be Like the Fox: Machiavelli in His World. She says that The Prince is also a warning to citizens.

“He thinks that citizens are responsible more than politicians. Yeah, you can sit there and say, “Look at Donald Trump or Vladimir Putin,” or whoever it might be, and point out how they lie here and there, and how that gives them an advantage or allows them to exploit fears. But at the end of the day, it’s up to us, it’s up to citizens, to see through these manipulations.”

Here are some words from the text. Match the words with their definition.

a. used for saying that something is almost not true or almost does not happen at all

c. someone who does not care whether or not their behaviour is morally right

d. willing to do things that are unfair, dishonest, or illegal

e. someone who uses their intelligence to get what they want, especially by tricking or cheating people

f. to not be suitable or right in a particular situation

g. to continue existing or happening for or until a particular time

h. willing to make other people suffer so that you can achieve your aims

i. used for saying where information or ideas have come from

j. a good quality or habit that a person has, especially a moral one such as honesty or loyalty

k. a sudden loss of power, status, or success

m. someone or something that works well and produces the result that was intended

n. a moral principle that prevents you from doing something that you think is bad

o. (in this context) a situation in which it is difficult for two things to exist together or be true at the same time

p. to recognize that something is not true and not be tricked by it

q. to trick someone by behaving in a dishonest way

r. if something is up to you, you are the person who makes a decision about it

t. used for saying what you consider is the most important thing about a situation after thinking about it

u. someone who lives in a particular town or city 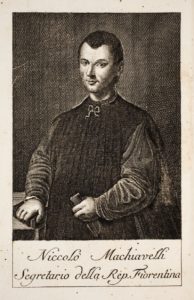 Here are two proverbs which could be related to Machiavelli:

And here are some quotes on politics.