Think of Roger and you might think of tennis shots that defy geometry and a Swiss role model admired worldwide. That’s if you live in Switzerland.

If you live in the USA, there’s another Roger making headlines. He’s the antithesis of the Swiss Roger and all things wholesome.

His name is Roger Stone. Last week Donald Trump used his presidential power to cancel the three-year prison sentence of his long-time associate and arguably the key enabler in his rise to presidency.

So, who is Roger Stone? And why was his release from serving prison time decried as “unprecedented, historic corruption” by former Republican presidential candidate Mitt Romney?

But first, a little lesson in slang (argot). To roger is verb used in British English that means to bugger (sodomise) someone profusely. It’s about as sexy as grab them by the pussy.

Roger Stone, 67, has made a career out of rogering Washington political players on behalf of his masters.

Stone is a kind of self-proclaimed gangster, fix-it man. He’s a master of dirty tricks; a brawler with bared teeth who loves to wear immaculate, but often odd suits and top hats, not unlike the more eccentric and violent gangsters of Hollywood that both attract and repel. Deep anger boils at the surface. Like Trump he believes he is untouchable. Above the law.

Stone owns it all. He describes himself as a dirty trickster and agent provocateur.

Stone’s rule is: It’s better to be infamous than never famous at all.

His apprenticeship in Washington began in 1972 with Nixon, the second most corrupt President in the modern era. His admiration for Nixon is exemplified by this tattoo he wears on his back, like a gang member (see photo above). The next horse he gambled on for the White House was Trump, who now probably deserves an even larger tattoo on Stone’s body. 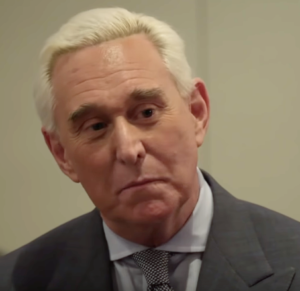 This extraordinary video (below) from Politico shows Stone’s rage and fury while replying to questions about a separate deposition for a range of civil suits. There was no judge present and Stone’s verbal language and body language is a performance worthy of Robert De Niro.

This was just days before he was sentenced for perjury and sentenced to three years in jail for making false statements to Congress, obstruction of justice and witness tampering.

He calls the lawyer who is interrogating him, “a little bitch”, mouths the words “fuck you” and accuses the lawyer of abusing his own children. His hands shake, his lips quiver and he grinds his teeth in fury.

The Stones and Epsteins of this modern America escape justice, but make fine materiel for documentaries on Netflix.

If you want a closer look at Roger Stone, then the Get Me Roger (Netflix) documentary offers some insights.

Why did Trump commute his sentences? Some commentators say it was out of loyalty. But loyalty is not a trait the president has in stock. It’s more likely he did it to save his own bacon. Stone has the dirt on Trump and was not going to go down all alone without a fight.

After his presidential pardon, Stone gave a victorious interview on the Murdoch-owned Fox News, also known as Trump TV.

It’s interesting to contrast this interview with CNN which spoke to respected law academic and writer Jeffrey Toobin.

There are two completely different narratives. The fault-lines are widening.

Footnote:  A team of fact-checkers employed by The Washington Post newspaper reported last week that the number of false or misleading claims made by the president while in office has reached 20,000, yes, that’s twenty thousand.