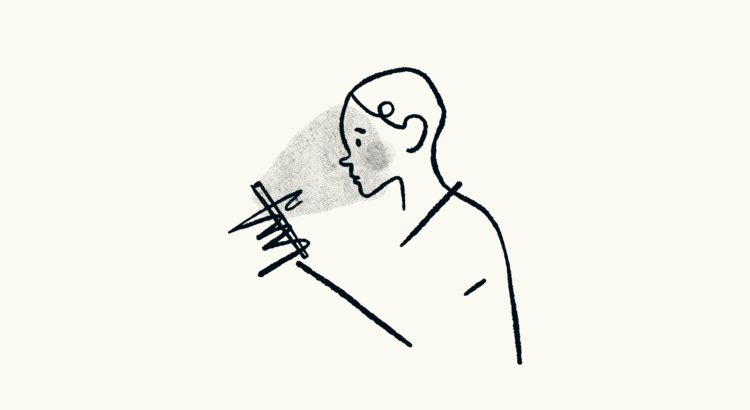 On the one hand foreign, but on the other hand French; deliciously other-worldly; comme un verre de Chateau Margaux Margaux 2015 (oh-so-seductive notes of warm blackberries, cassis and black forest cake with touches of forest floor, sandalwood, anise and cigar boxes plus a waft of lavender).

Or like Guerlian’s Chamade fragrance (a hymn to love that unfurls like the spring with equal grace, femininity, independence and attraction).

Now meet Parler (pronounced Parl-lay). It’s a new social network in the USA that wants you to speak freely (parler librement). Channel your inner racist and your best hate speech. It’s the Twitter you need, when you want to be your most extreme, or when Twitter has decided you are too extreme and has expelled you.

when you disagree with someone

There’s little chance you’ll be ex-communicated here. Parler is the go-to-place for haters. Anything goes. More or less. There’s room to breathe. The rules are simple, as eloquently explained by 26-year-old chief executive, John Matze. 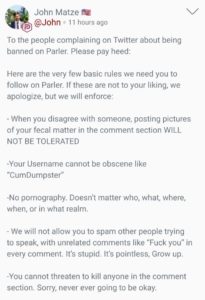 Rule number one: No posting pictures of faecal matter (shit) when you disagree with someone. Threatening to kill people is also frowned upon.

You might say:  Parler is a hymn to free speech that unfurls like a sweaty gun holster stained with the oh-so-seductive notes of racism, misogyny, conspiracies, vilification and hate with a bitter-sweet after-waft of neo-Nazis and white supremacy and a touch of alternative truth. (Yeah baby! That’s my stink!)

You can download Parler at your App Store, or at least for the moment.

You can join luminaries such as the Trump boys (Dad has not signed in as yet), the White House press secretary Kayleigh McEnany, most of the Trump team, including motor mouth Rudy Giuliani, Senator Ted Cruz and don’t forget Katie Hopkins, who compares immigrants to cockroaches and called for a “final solution” in relation to Muslims. Remember Milo Yiannopoulos? No, you’d rather not. Understandable. He’s there too.

The president has 82.6 million followers

moment Parler is not so enticing

Parler already has 1.5 million users, according to the company. Twitter has 330 million monthly actives users. Facebook has 2.6 billion active users.

But why no Donald? The president has 82.6 million followers on Twitter, so for the moment Parler is not so enticing.

Parler promotes itself as a fee speech utopia. The problem with Parler is that it is an echo chamber. It’s like being at MAGA rally.  There’s no pushback, little debate and little influencing. The converted are giving sermons to the converted. Everyone is wearing red baseball caps. There is a lot of angry noise, but little colour or grace.

Une réponse à “Parler-librement. Parler is a Twitter for the haters.”