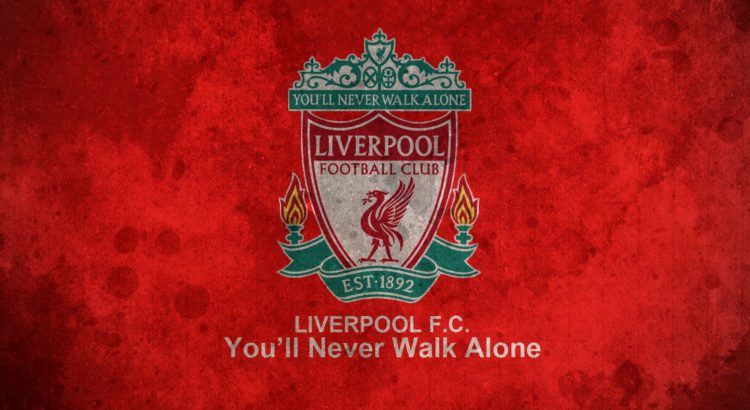 Love it or hate it, football, especially English football, is often the stuff of fairy tales.

It’s a potent mix of tribal passion, tragedy and surrealism. UK premiership football has history. It is a mirror, stained and cracked, that reflects the trials and tribulations of generations where football is not just football. The round ball is life.

In 2016 we witnessed the magical tale of Leicester City Football Club and the re-internment of the bones of King Richard III dug up under a city car-park – read more here.

The story of Liverpool’s 2020 premiership is a grittier and darker story of redemption, exemplified in the haunting club song, You will never walk alone. It’s an anthem of sufferance and hope that transcends the brilliance of King Salah of Egypt, the Dutch centre-half poet, Virgil van Dijk, the goal scorer from Bambali, Senegal, Sadio Mané, and of course, the mastermind with the finest brain and teeth in modern football, Jürgen Klopp from the small Black Forest village of Glatten.

It’s the most beautiful song in the world. Everybody feels it, everybody loves it.

Walk on, walk on
With hope in your heart
And you’ll never walk alone

Walk on, walk on
With hope in your heart
And you’ll never walk alone

Klopp and the Kop are of the same family. The Kop is the name of the famous steep stand at Anfield, the Liverpool home ground. It is said the Kop army of 50,000 supporters in full voice can suck the ball into goal.

Pink Floyd recorded the Kop in the last two minutes of their song Fearless from the album Meddle released in 1971.

But why the name Kop? In 1900, during the Boer War in South Africa, the British Army fought to capture a hilltop, and 300 men died, most of whom were from Lancashire and many from Liverpool itself. The name of the hill was Spion Kop.

on modern football, justice and

journalism in the history of the UK,

was to come later

A greater tragedy, arguably the greatest stain on modern football, justice and journalism in the history of the UK, and I do not exaggerate, was to come later.

The Hillsborough disaster was a fatal human crush (mouvement de foule fatal) that claimed the lives of 96 Liverpool supporters, men, women and children at the Hillsborough Stadium in a match between Liverpool and Nottingham Forest on April 15 1989.  Four hundred were taken to hospital.

The investigations, court cases and public inquiries continued right up to last year. We now know that it was a police mistake that led to the crush. We also know that the police lied repeatedly, doctored documents and, with heinous intent, shifted blame onto the supporters.

The lies were lapped up by the Murdoch tabloid, The Sun, which produced this shameful front page the following day: 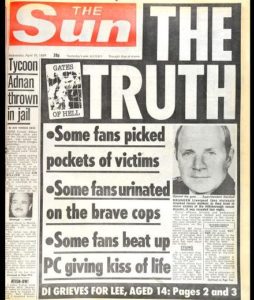 It was not the truth. It was LIES. Pure tabloid gutter journalism, from the stable of the Murdoch media.

The newspaper ran claims from anonymous police officers that, as people were dying at Hillsborough, their fellow supporters stole from them, urinated on police officers and beat up “brave cops” trying to help.

It was not the truth. It was LIES.

from the stable of the Murdoch media

It took 15 years before The Sun finally offered an apology. It read in part:

The Sun’s reporting of the Hillsborough tragedy 23 years ago is without doubt the blackest day in this newspaper’s history. The Hillsborough Independent Panel’s report into the disaster lays bare the disgraceful attempt by South Yorkshire Police to hide their culpability behind a smokescreen of lies. It highlights a concerted campaign by senior officers to smear the innocent by fabricating lurid allegations about Liverpool fans — and then feeding them to the media.

But it is to the eternal discredit of The Sun that we reported as fact this misinformation which tarnished the reputation of Liverpool fans including the 96 victims. Today we unreservedly apologise to the Hillsborough victims, their families, Liverpool supporters, the city of Liverpool and all our readers for that misjudgment.

Even today, few people buy The Sun in Liverpool.

In 2016, some 27 years after the disaster, a further inquiry finally ruled that the 96 people were killed unlawfully and the actions of police were the principal cause of the disaster. It also refuted all of the scandalous claims made in The Sun. No-one has been found guilty. 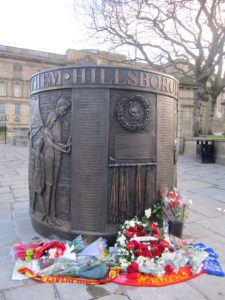 This was the scene in Liverpool on April 15 this year – the 31st anniversary of Hillsborough.