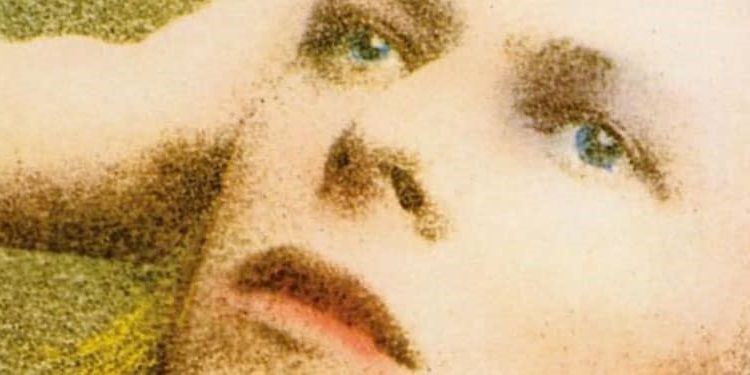 I’ve got a song stuck in my head. It pings around my neurons and exits in whistle, song and hum from dusk to dawn. On repeat play.

You probably know the song, if you like your dogs with diamonds, know an astronaut called Major Tom, or like a little stardust…

Here are the first four lines of the song:

The song is called Life on Mars?, written and sung by David Bowie. Bowie said that the melody and riff came to him on a bus after a sunny, druggy day in a park in London.

One journalist later wrote that Bowie “saw the Cosmos in a bus-stop”.

Another UK journalist ranked it the greatest song of all time. He wrote:

A quite gloriously strange anthem, where the combination of stirring, yearning melody and vivid, poetic imagery manage a trick very particular to the art of the song: to be at once completely impenetrable and yet resonant with personal meaning. You want to raise your voice and sing along, yet Bowie’s abstract cut-up lyrics force you to invest the song with something of yourself just to make sense of the experience. And, like all great songs, it’s got a lovely tune.

It does have a lovely tune and you do want to sing along. The problem is that for the last week or two,  I can’t get it out of my head to quote Electric Light Orchestra. The song is Always on my mind, as the Pet Shop Boys might say.

The origins of Life on Mars? can be traced back to France, a few years before Bowie’s sunny druggy bus day.  It all began with the pop megastar Cloclo, (Claude François) who put the glow-glow into the hearts of the French during the 60s and 70s before tragically electrocuting himself in the shower.

One of his many tubes (hits) was Comme d’habitude (co-written by Jacques Revaux) released in 1967 and based on his break-up with fellow French singer France Gall.

A year later the music landed on the desk of an unknown UK singer songwriter named David Jones, who had recently changed his name to David Bowie. (His first extra-terrestrial hit, Space Oddity which would open his fame stargate was still two years away).

Among the jobs that kept Bowie in fags, food and mascara was writing English lyrics to hit songs from continental Europe. Comme d’habitude, became Even a Fool Learns to Love (Même un imbécile apprend à aimer). Bowie later admitted the music was great, but his lyrics were shite. It was never released.

In 1969, an astonished Bowie heard the song on the radio. Same music, but with lyrics written by Paul Anka. And the voice…aaaah, it was unmistakable. It was Frank Sinatra, and Comme d’habitude was now My Way, a timeless anthem and a funeral favourite, and one of the most successful songs in the history of popular music.

A peeved and pissed Bowie decided to write a revenge song which he called Life on Mars? It was first released on Bowie’s 1971 album Hunky Dory and later released in 1973 as a single. On the album cover notes (below) he wrote: ‘inspired by Frankie’ next to track number 4. 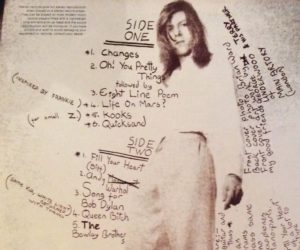 The songs share some of the same chords and structure, but the subject matter couldn’t be more different. My Way is a self-assured celebration of a life lived with little or no regrets. Angst, disappointment and a strange hope lie at the heart of Life of Mars?

In 2008, Bowie recalled writing this song to the Mail on Sunday:

This song was so easy. Being young was easy. A really beautiful day in the park, sitting on the steps of the bandstand. ‘Sailors bap-bap-bap-bap-baaa-bap.’ An anomic heroine. Middle-class ecstasy. I took a walk to Beckenham High Street to catch a bus to Lewisham to buy shoes and shirts but couldn’t get the riff out of my head. Jumped off two stops into the ride and more or less loped back to the house up on Southend Road. Workspace was a big empty room with a chaise lounge; a bargain-price art nouveau screen (‘William Morris,’ so I told anyone who asked); a huge overflowing freestanding ashtray and a grand piano. Little else. I started working it out on the piano and had the whole lyric and melody finished by late afternoon. Nice. Rick Wakeman [soon to join the prog rock band Yes] came over a couple of weeks later and embellished the piano part and guitarist Mick Ronson created one of his first and best string parts for this song which now has become something of a fixture in my live shows.

Wakeman recalled the afternoon in an interview (see video below) after Bowie’s death.

So, what does the song mean?

It tells the story of a girl who seeks escape in cinema, only to realise the same sad and boring cliches are played out on the screen. It is a song of disaffection and yearning for truths, but it is strangely positive, despite that Mickey Mouse has grown up a cow and the lawman beating up the wrong man.

Can we do better? There must be a better life somewhere. Is there life on mars?

Sailors fighting in the dance hall
Oh man, look at those cavemen go
It’s the freakiest show
Take a look at the lawman
Beating up the wrong guy
Oh man, wonder if he’ll ever know
He’s in the best selling show
Is there life on Mars?

It’s on America’s tortured brow
That Mickey Mouse has grown up a cow
Now the workers have struck for fame
‘Cause Lennon’s on sale again
See the mice in their million hordes
From Ibiza to the Norfolk Broads
Rule Britannia is out of bounds
To my mother, my dog, and clowns

Sailors fighting in the dance hall
Oh man, look at those cavemen go
It’s the freakiest show
Take a look at the lawman
Beating up the wrong guy
Oh man, wonder if he’ll ever know
He’s in the best selling show
Is there life on Mars?

Bowie talks to Michael Parkinson about Life on Mars. (Forward to 20:55)

This is the Sex Pistols version of My Way:

And here’s Aurora’s version of Life on Mars?: