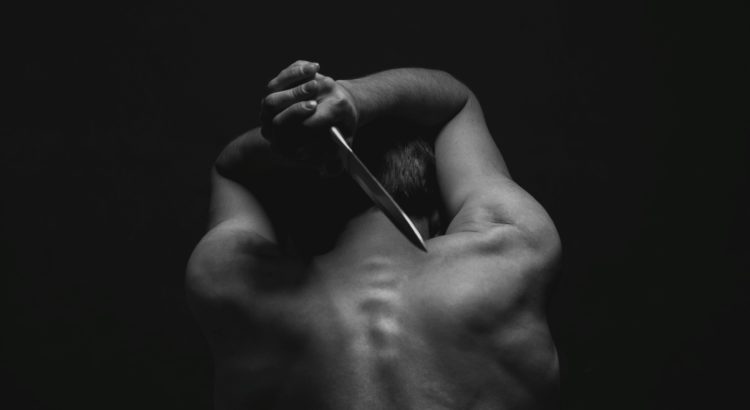 Be careful. That knife is sharp.

There is nothing like a little murder and crime to take you mind off a pandemic.

And no-one does it better than the queen of crime and murder, Agatha Christie, who died 44 years ago.

Her books are said to rank third in the most published works, behind the Bible and Shakespeare.

Her play, The Mousetrap, adapted from one of her books, is the longest-running piece of theatre in history. It was first performed in London in 1952 and is still running today.

Welcome to a bloody English in the Time of the Pandemic # 5.

As Benedicte writes below, everyone is a suspect. Until the very last page. It’s a puzzle and we are waiting for the last piece of the jigsaw, when all will be revealed.

Was that really tomato sauce on your shirt, or a bloodstain?

Be careful, that knife is sharp. It’s time to improve your language of crime. 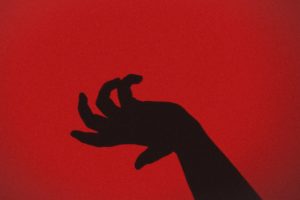 Agatha Christie: The Queen of Crime

I don’t normally like murder stories; they’re too bloody and dark. But I make an exception for Agatha Christie, aka, the Queen of Crime. That is because her stories are more like puzzles than murder stories.

Her style does not contain gore or disturbing psychological behaviour. In fact, it is rather light and at times, humorous. It is also really easy to read!

In her novels, each character is idiosyncratic and well-rounded, so we get to know them well, on the surface – although we don’t necessarily get to like them. Everyone is a suspect, everyone has a motive, everyone has a secret, and most of time, everyone is very, very English.

It has been said that she was not always kind in her description of female characters. This may be true at times, but there are as many women as there are men in her stories.

The stories are set in a pleasant environment, usually an upper-middle class or upper class environment, such as a large manor house in England, a long-distance luxury train, on a small aeroplane, a river boat with servants, a hotel near an excavation site in the Middle-East, or a resort somewhere in Europe by the sea.

Everyone is a suspect,

everyone has a motive,

everyone has a secret,

and most of time,

everyone is very, very English

The stories always centre around a murder, and in some cases, several murders. They do not usually contain plot holes. They provide a minimum number of clues as to who has committed the murder. The murders are always premeditated and quite unrealistic. Her kind of murders would never happen in real life!

The readers have to wait to the end of the story to find out who the culprit is. This is part of the appeal of Christie’s stories: they are pager-turners, they keep you guessing, they are a puzzle one wants to solve, and the twists always surprise you. For even if you guess the identity of the culprit, you don’t always guess how the crime was committed.

Her stories are what you call ‘whodunnits’. A whodunnit is a colloquial elision of “Who has done it?” It a story or play about a murder in which the identity of the murderer is not revealed until the end.

She often called on her most famous character Hercule Poirot, a Belgian detective with an artistic moustache who likes to use his “little grey cells” and his knowledge of psychology. He starred in no less than 33 novels, two plays and more than 50 short stories. In my opinion, the actor David Suchet gave the best portrayal of the detective in a television adaptation of the stories. And then there is Miss Marple, a very clever elderly lady and amateur consulting detective, who appeared in 18 novels and three short stories.

Agatha Christie (1890-1976) wrote 66 detective novels, 14 short story collections and several plays. She served in a hospital during the First World War and the Second Word War and acquired a good knowledge of poisons, which feature in many of her novels. She was initially an unsuccessful writer with six consecutive rejections, but this changed when The Mysterious Affair at Styles was published in 1920 featuring Hercule Poirot. After that, she published at least one book every year. Apparently, her works come third in the rankings of the world’s most-widely published books behind Shakespeare’s work and the Bible.

My favourite Agatha Christie novels are Murder on the Orient Express, which has a totally unexpected ending, and And Then There Were None, perhaps her darkest work.

Please tell us in the commentaires section at the bottom of this page.

It is always good to receive recommendations from other crime story readers!

Match the words in the text above with their definition. Check your answers below.

a. the crime of killing someone deliberately

b. a long written story about imaginary or partly imaginary characters and events

c. enjoyable and not very serious

e. also known as: used when giving someone’s real name followed by a different name they also use

f. a dark time is one in which people feel frightened, unhappy, and without hope

g. blood from an injured person that is thick because it is partly dried

h. idiosyncratic tendencies are unusual or strange, and not shared by other people

i. the reason that you do something

j. including a good balance of various subjects

k. the social group between the upper and the middle class made up of well-paid professionals, managers, and their families.

l. a person in a book, play, film etc

m. an obvious mistake or missing element in the plot of a film, book, TV show or play

o. someone who is responsible for doing something bad or illegal

p. a place that many people go to for a holiday

q. a type of person or thing

r. if something centres around someone or something, or if you centre something around them, they are its main subject of attention or interest

s. an object or fact that someone discovers that helps them solve a crime or mystery

t. to let something become known, for example a secret or information that was previously not known

u. to find a solution to something that is causing difficulties

v. to be the main actor or performer in a film, play, television programme etc

w. a book that is very interesting or exciting

x. a sudden unexpected change in a situation

y. (in this context) to do something illegal or morally wrong

aa. to be an important part or aspect of something

cc. a film, TV programme etc that has been made from a book or play

dd. to succeed in doing or having what you planned or intended, usually after a lot of effort

ee. a piece of writing intended to be performed by actors in a theatre or on television or the radio

Improve your crime-related vocabulary. Read more here and watch the video below

Agatha Christie: How to write a best-selling crime novel

An interview with Agatha Christie from 1955. How to write a best-selling novel:

The life of Agatha Christie

In this documentary, the actor David Suchet talks about Agatha Christie’s life (48 mins):

Murder on the Orient Express trailer

The latest cinema adaptation of Murder on the Orient Express, with an all-star cast.

And Then There Were None trailer

This is the latest television adaptation of And then there were none. It is fantastic.