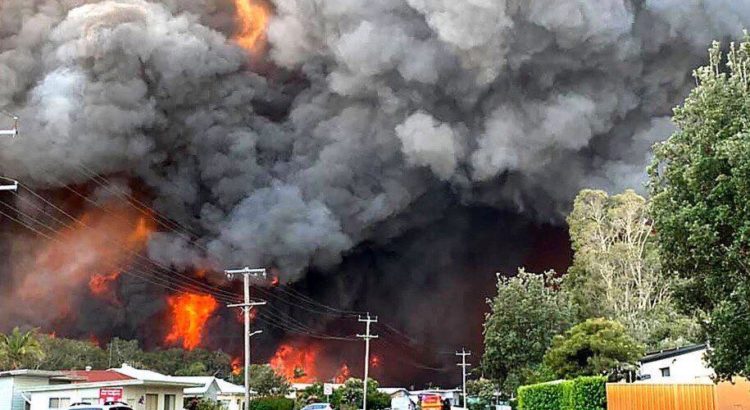 Welcome to Australia. The land Down Under.

Sunshine, spectacular beaches, surf, a few dangerous spiders and snakes, a shark or two, a crocodile here and there, a bit of racism (a lot, if you are an Australian Aborigine), a love of sport, kangaroos and koalas and an easy-going lifestyle.

It’s no wonder it’s known as the Lucky Country. It’s resource-rich with some of the biggest mines in the world. Dig it up and sell it. It’s been a rich winning formula for years. In fact, Australia is so lucky, that according to the Australian Government, there’s no such thing as climate change, and certainly don’t ever mention a climate emergency. And they will tell you that. If you have the temerity to link climate change to dying rivers and unprecedented bushfires, the deputy Prime Minister (second-in-charge) will correct you in no uncertain terms:

“That’s the ravings of some pure, enlightened and woke capital city greenies.”

As one of his parliamentary colleagues so vehemently told Australians:

“The Greens politicians are exploiting this tragedy (bushfires) to pump up their cult, by saying things that are completely untrue, against the science and just trying to recruit more members to the cult.”

It’s just as well the climate emergency and science are fictional in this pocket of the world, because Australia is the world’s leading coal exporter.  Coal is in the blood, and in the bank accounts of Australian governing elite. The now Prime Minister Scott Morrison, a marketing man and a fervent Pentecostal Christian, even brought a lump of coal to the national parliament a few years ago.

“This is coal, don’t be afraid,” he told the nation. You can watch the surreal moment here.

About a million hectares or 10,000 square kilometres

have been destroyed by fire in the last week or so.

That’s about a quarter of Switzerland.

The Australian government has just approved the construction of a heavily subsidised coal mine for an Indian mining giant that will cover a surface of 450 square kilometres. (That’s about 1.5 times the size of the canton of Geneva). There’s another application for a coal mine four times that size. It’s proposed by a portly Australian miming magnate who generously exercised his democratic rights by spending $60 million in the last federal election to ensure there would be no change in business as usual.

Another reason why the Australian Government is blind to climate change is because of the smoke. Great swathes of the country are on fire. Undoubtedly, you’ve seen reports in the media. First California, and now Australia. And it’s not even summer in Australia. The smoke is everywhere, especially in your eyes. You can’t see the wood for the burning trees, nor the science for the claptrap. 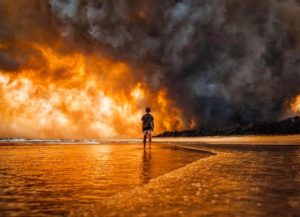 About a million hectares or 10,000 square kilometres have been destroyed by fire in the last week or so. That’s about a quarter of Switzerland. Six hundred schools were closed last week. And let me repeat, it’s not even the high summer season. Just a warm-up of what’s to come.

Catastrophic is the new official word, introduced in 2009, to describe the unprecedented ferocity of fire and danger. In the good old days, it was just extreme fire danger. These are the updated climate billboards that sit outside hundreds of towns across Australia. 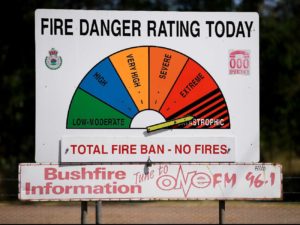 Forest fires and drought are as Australian as kangaroos. The land’s most successful non-human colonist is the eucalyptus, or gum tree. It settled in Australia about 50 million years ago. The Eucalyptus has not only adapted to fire, but it encourages fire and needs fire to regenerate.

Eucalyptus oil is highly flammable. Burning trees have been known to explode. Bushfires can travel swiftly through the oil-rich air of the tree canopies.

The Australia Broadcasting Commission reported how, like California, the normal bushfire season is a thing of the past. Welcome to the new normal, and it’s pretty terrifying.

When temperatures reached 52 degrees a few years ago, Australia’s Bureau of Meteorology had to add a new colour to the top of its temperature scale, an incandescent purple.

One of the largest river systems that runs through much of the south-east of Australia has almost stopped flowing due to climate change and mismanagement. Another term was added to the growing lexicon of climate disaster:  fish kill.

More than a one million fish have died.

For much of the twentieth century there were major bush fires, usually once a generation.  In the 1980s things started to change for the worse. These fires today are different. They are catastrophic, more and more violent and now an annual affair. The fire season now starts in Spring and for the first time ever, the rainforests are burning.

Switzerland and most of Europe acknowledge and have actively begun to legislate to reduce the effects of climate change. Even Margaret Thatcher recognised the threat of climate change. Eleven thousand world scientists called for action to tackle climate emergency last week.

The sheer arrogance of the governing elite

is gob-smacking. But this is the macho political

The Australia Government knows better. It has adopted the US gun massacre response. Straight out of the handbook.

Ignore it. Offer thoughts and prayers. It’s just Green hysteria. How dare you talk about politics (climate change) when people’s lives and livelihood are under threat.

(Australian cartoonist First Dog on the Moon: We mustn’t bring politics into the disastrous situation that was created by … wait for it … POLITICS)

The sheer arrogance of the governing elite is gob-smacking. But this is the macho political landscape where Rupert Murdoch cut his teeth. Science is attacked, lies are repeated, messengers are attacked and facts are confused and altered. The cowboys of obfuscation.

The Australian government has sent its memos out to its employees: Just don’t say climate change.

Here’s a report from CNN from November 11.

The terrible irony is that Australia has plenty of free clean energy. More sun than you can poke a stick at. There’s lots of sun, but no leadership in the Lucky Country. It’s no wonder a Green politician told the government last week:

“You are no better than a bunch of arsonists – borderline arsonists – and you should be ashamed.”

More: Here’s a first-person account of the horror of the current fires.