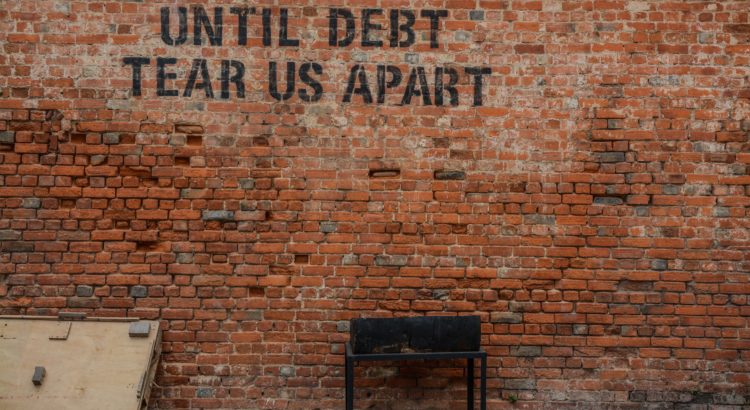 It comes from two Italian words; bancus (table or bench) and ruptus (broken). If a Roman trader was unable to meet their debts or their business practices were unscrupulous, their trading table would be broken – a clear sign for all.

In the New Testament, Jesus also vandalised some tables in a temple. He found that the money changers and the dove (colombe) sellers not so much financially bankrupt, but morally and spiritually bankrupt.

The Old Testament says bankruptcy and debt were often forgiven every 50 years; an event known as the Jubilee or Holy Year. According to the book of Leviticus; slaves and prisoners would be freed, debts would be forgiven and the mercies of God would be in abundance.

The Greeks weren’t so forgiving. If a man owed a debt that he was unable to pay, his entire family ­including any servants he owned became debt slaves. Today bonded or debt labour is the most widely used method of enslaving people around the world.

A fantastic and grotesque story about debt and forgiveness concerns the Creech tribe of Sumatra. It’s a brilliant story to impress dinner guests, but best told between dishes. Travel writer Paul Theroux in his book of anthropological fiction Unspeakable Rituals describes the Creech people as violent, quarrelsome, and in general, not very nice. But he says they have one unique tribal tradition.

Instead of complicated debt laws the Creech have a Memory Man. The Memory Man receives his title at birth. He possesses the entire memory of the tribe, and may spend as much as a week, day and night, reciting their genealogies, property, debts and activities

The Memory Man receives his title at birth.

He possesses the entire memory of the tribe, and

may spend as much as a week, day and night,

When a dispute arises the Memory Man settles it, because he knows what really happened. He knows all the secrets, debts, lies, infidelities and crimes.

After thirty years have passed and he is old by Creech standards – shrunken, wrinkled, probably toothless, probably losing his memory – a meeting is convened. The Memory Man recites the whole of the Creech history (or as much of it as he can remember) and at the conclusion he is put to death. He is then barbecued and eaten by every member of the tribe, in a ritual known as the ceremony of purification.

Nothing is left. The tribe has literally lost its memory, and they embark on a huge, orgiastic celebration of love and happiness and freedom – the best freedom of all, which is freedom from the past.

In England, before the Bankruptcy Act of 1869, debtors and often their families were routinely imprisoned, sometimes for decades. Most European countries limited imprisonment for debt to one year, but debtors in England were imprisoned until their creditors were reimbursed. When the Fleet Prison closed in 1842, some debtors were found to have been there for 30 years.

The English writer Charles Dickens wrote extensively about the infamous debtors’ prisons in his novels. Dickens’ father was sent to the Marshalsea Prison on the River Thames because of a debt to a baker. Young Charles was forced to leave school and start work at the age of 12 to support his family. 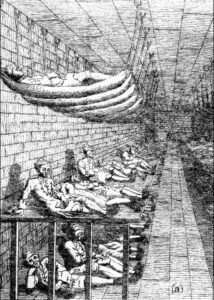 Hospital for men at Marshalsea Prison

A parliamentary committee reported in 1729 that 300 inmates starved to death in the prison over a three-month period, and that eight to ten prisoners were dying every 24 hours in the warmer weather.

Dickens was haunted by his experience. He later wrote:

My whole nature was so penetrated with grief and humiliation…that even now, famous and caressed and happy, I often forget in my dreams that I have a dear wife and children; even that I am a man; and wander desolately back to that time of my life. 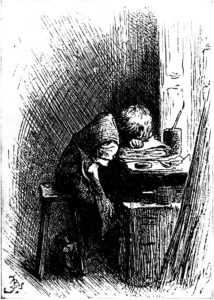 Today in the USA corporate world, bankruptcy (better known as Chapter 11) is a well-used form of debt restructuring when business goes sour.

Donald Trump’s empire of hotels and casinos are valued in the hundreds of millions. In 1991, 1992, 2004, and again in 2009, Trump-branded companies or properties were declared bankrupt and sought Chapter 11 protection.  Many companies, such as General Motors, United Airlines and retail outlet K-mart have filed for Chapter 11, but managed to stay afloat.

Debt is one of the cornerstones of capitalism. The US debt is now about 22 trillion dollars. It’s an inconceivable amount. It is written like this – $22,000,000,000,000. About 75 per cent of Americans are in debt when they die.  The average debt is about $66,000. A staggering 80 per cent of Americans are in some kind of debt; student debt, housing debt, medical debt, credit cart and card debt.

In contrast, thrifty Switzerland prefers a surplus and has the lowest debt to GDP ratio in Europe.

The National Debt Clock in New York is an electronic billboard which constantly updates the current United States gross national debt and each American family’s share of the debt.  The clock was modified in 2008 when the debt and its many zeros outgrew the billboard.

So, what does $20 trillion dollars all stacked up in crisp 100-dollar bills look like. Would it fill a swimming pool or a football stadium?   This what it looks like. It’s bigger than the extended Godzilla family, and it is still growing. It will be just as difficult to tame.