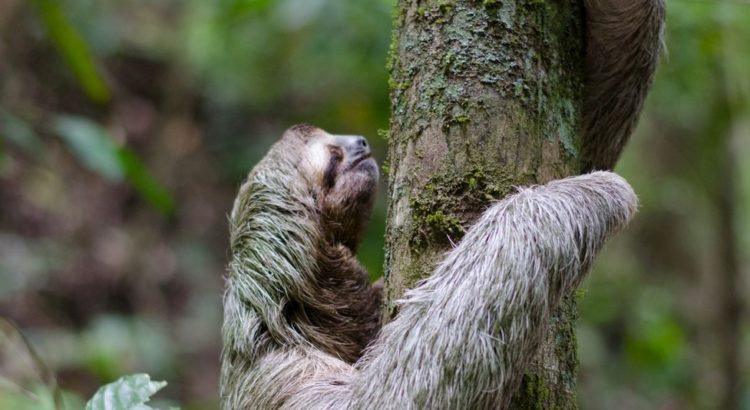 PETA, People for the Ethical Treatment of Animals, has never been shy when it comes to viral marketing.

The world’s largest animal welfare group is about as subtle as a bull in a china shop when it comes to using shock horror tactics to attract attention to its message. Why? Viral means lots of clicks, lots of attention, heated discussion and, of course, free publicity. And it works. Powerful and shocking messages such as these have helped to change the eating habits of millions.

PETA now has a beef with language. It’s got a bee in its bonnet about anti-animal language. It wants to remove the language of speciesism from our daily conversations. 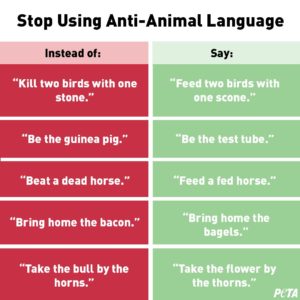 PETA has even developed a lesson plan for eager teachers who wish to encourage their students to replace expressions such as kill two birds with one stone (faire d’une pierre deux coups), with feed two birds with one scone. (It sounds kind of cute, but when I think of scones, I think of jam and cream. Furthermore, scone as it is pronounced by most English speakers, rhymes with don, not stone, and I am sure scones, with or without jam and cream, would be terrible for a bird’s digestion system.  It would be high tea murder.)

Changing language habits isn’t that simple. Or to put it another way, a leopard cannot change its spots, and as you know, you can lead a horse to water, but you can’t make it drink. The internet reacted with typical cynicism saying PETA was barking up the wrong tree and that there were bigger fish to fry than trying to change a few animal expressions.

The English language, as against French, is far from static. It’s forever changing, just like our eating habits. We absorb, with differing degrees of success, new words for technology, products, ideas, fads and fashions as well as words that morph in meaning, sometimes almost naturally and sometimes propelled by politics and propaganda.

Some words like selfie, explode into usage. Others like gay, which once meant happy and full of life, and now refer to homosexuality, have taken literally decades to come out of the language closet.

It is less painful and more woke, we are told, to consciously uncouple than to divorce

Workers, once upon a time, were sacked or fired. Now they are made redundant, laid-off, discharged, decruited, outplaced, part of a workforce imbalance correction or simply let go…

It is less painful and more woke, we are told, to consciously uncouple than to divorce.

People who speak English as a second or third language (now the largest group of English speakers on the planet, and quite possibly that means you, my dear reader) have also made the language simpler, more standardised, and a little more robotic. Many of these old and odd animal expressions, such as there is more than one way to skin a cat (not particularly uplifting) will over time simply drop out of circulation. Charming old-world expressions like How do you do? are now almost redundant, replaced by Nice to meet you or Pleased to meet you.

Language is sometimes not very sexy. For many, neither is eating greens and grains all day, every day. This PETA message below, however, will transform the wildest meat-eating Conan or Caren the Barbarian into eager-beaver vegans. It hits the bulls-eye.

like a bull in a china shop – to behave recklessly and wildly; the opposite of gentle and subtle

curiosity killed the cat – being too curious can be dangerous

to bring home the bacon – to earn a regular income

to bark up the wrong tree – to have a wrong idea, or do something in a way that will not give you the information or result you want

an eager-beaver – someone who is very enthusiastic

to hit the bulls-eye – to get something exactly right or be on target.