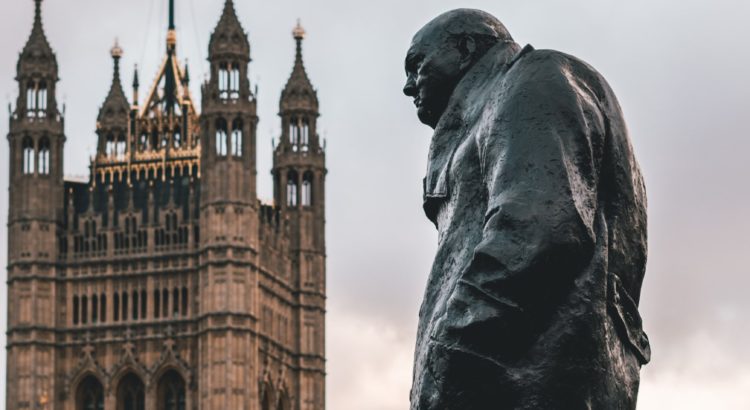 In British history one person stands head and shoulders above the rest.

It’s neither Shakespeare nor Queen Victoria. Not the Queen, not Princess Di, not even Isaac Newton or Charles Darwin.

It’s Winston Churchill, a man of small stature with a towering greatness;  a writer, orator and leader who as Prime Minister led Britain to victory in the Second World War. In nation-wide polls, he is regularly named the greatest Briton of all time.

Churchill is also an iconic figure for many non-English, especially French speakers. Politically, he would sit on the political spectrum knee-to-knee with Donald Trump and is still widely detested by many on the political left. He had many failures, some terrible and spectacular, which perhaps gave him the grit and determination for his greatest success.

As an English leader and orator in a time of war – we shall fight on the beaches, we shall never surrender – he is admired by all. He’s been given the eponymous accolade, joining an illustrious club that includes Shakespearean, Kafkaesque, Machiavellian, Freudian, Marxist and our very own Calvinist, to name a few.

A Churchillian leader is one who is uncompromising, focused, determined and able to electrify great swathes of the population with their words.

President John F. Kennedy said of Churchill: “He mobilized the English language and sent it into battle.” (The president was quoting Edward R. Murrow of CBS News).

In the clip above, Gary Oldman potrays Churchill in the film The Darkest Hour. The speech is clearer and better enunciated that the real Churchill who managed to often sound as if he had a mouthful of marbles and a belly-full of whisky; the latter more likely.

Here’s the original speech from the man himself.

He had an upper-class plummy accent, but what we hear is not the ring of a haughty aristocrat, but of a man who suffered from a lisp and stammer much of his life. A fine pair; Winston Churchill and the stammering King George VI, both tongue-tied with speech defects, bullied and social recluses in their childhood led the fight against Nazi Germany.

Do not argue with an idiot. He will drag you down to his level and beat you with experience

Churchill has since become an entertainment industry. About 500,000 people visit the underground Churchill War Rooms in London each year. Hundreds of biographies have been written, many by political leaders and many more by aspiring leaders. Albert Finney, Rod Taylor, Brendan Gleeson, Richard Burton, Timothy Spall, Bob Hoskins, John Lithgow and Michael Gambon have all sucked deep on the cigar, filled their mouths with marbles and spoken forth: Success is not final, failure is not fatal: it is the courage to continue that counts.

Churchill did this in his own words. He was his own speechwriter. His granddaughter, the author Celia Sandys, said that Churchill’s facility with words was most helpful to his family. “Whenever he needed some money, he picked up his pen. We lived from pen to mouth,” she said in an interview, sounding very much like her grandfather’s grand-daughter.

A lie gets halfway around the world before the truth has a chance to get its pants on.

Churchill did not do only gravity and inspiration, but was also a master of humour and put-downs that had them rolling with laughter in the aisles of Westminster parliament and in front of radio sets in lounge-rooms throughout the isles.

He mastered a wordplay  known as a paraprosdokian, loved by satirists and humourists. It is usually a short phrase that features two ideas. The first idea is often positive or an expression the listener may identify with, such as this one from Groucho Marx:

She got her good looks from her father…

The second part of the phrase has the dramatic effect. It’s a kind of verbal ambush, that forces the listener to radically reinterpret the complete phrase.

She got her good looks from her father; he’s a plastic surgeon.

Some of Churchill’s best-known ambushes and put downs:

The last thing I want to do is hurt you. But it’s still on my list.

If I agreed with you, we’d both be wrong.

History will be kind to me, for I intend to write it.

Do not argue with an idiot. He will drag you down to his level and beat you with experience.

Light travels faster than sound. This is why some people appear bright until you hear them speak.

History will be kind to me, for I intend to write it.

I may be drunk, Miss, but in the morning I will be sober, and you will still be ugly.

It has been said that democracy is the worst form of government except all the others that have been tried.

We know that he has, more than any other man, the gift of compressing the largest amount of words into the smallest amount of thought.

A modest man, who has much to be modest about.

A lie gets halfway around the world before the truth has a chance to get its pants on.

In the course of my life I have often had to eat my words, and I must confess that I have always found it a wholesome diet.

Yes, indeed. So also have we.