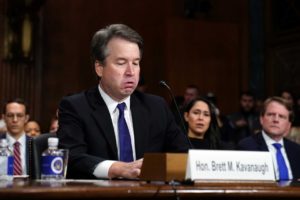 Before you start interviewing male and female schoolmates and acquaintances of Judge Kavanaugh, I suggest you go online and have a look at a dictionary called Urban Dictionary. The address is www.urbandictionary.com

This will help you to decode the slang used by Brett Kavanaugh, then aged 17, in his college yearbook entry. It is quite revealing and will give you a much better understanding of Mr Kavanaugh’s relationship with women and alcohol. Unfortunately, I must warn you that some of the terms are a little unsavoury.

These terms you will not find in the Oxford Dictionary. But you will find them in the Urban Dictionary which is a crowd-sourced dictionary for words and expressions, a great many of them slang. Its motto is “Define Your World.”

Let me explain how it works. The dictionary is open to everyone. People post words and their definitions and language devotees then vote on them according to their perceived accuracy and wit, with thumbs up (approval) and thumbs down (disapproval). The most approved definition ranks number one and is generally considered the most accurate. Each entry shows the date that the definition was posted and how many people approve or disapprove of its accuracy. There are often 30 definitions or more for a word or expression. In many cases the definitions are quite similar. The dictionary began in 1999.

Kavanaugh’s yearbook entry, as you know, lists his accomplishments written in his own hand. It is rich in slang.  Slang was developed by criminals and the working classes as a secret or coded language, incomprehensible to the police and authorities. I am sure you FBI agents have your own slang. Similarly, Kavanaugh’s yearbook slang was meant to be indecipherable to parents and teachers; in fact, all adults, including US senators and, of course, FBI agents.

So, let’s see if we can “define his world” based on his yearbook entries. I’ve picked just three words. I know you have only a week for your investigation. I don’t want to waste your time.

Word number 1: Boofing (verb):  In his year book he writes “Have you boofed yet?” When asked by an elderly senator during his nomination hearing, what boofing meant, Judge Kananaugh replied that it referred to flatulence (farting).  It seems he was asking his classmates if they had ever farted.

The Urban Dictionary has a different definition of boofing. The top-ranked definition posted in 2005 is as follows: The act of inserting drugs, into the anus for a longer effect.

Term number 2: Devil’s Triangle (proper noun): Also mentioned in his yearbook entry. It’s the name of a drinking game the judge told the hearing. There are 30 definitions of the Devil’s Triangle in the Urban Dictionary. The most popular definition, and it’s very exact, was posted in 2008:

Once again there are other definitions, such as to insert your penis into three different parts of a woman.

Many new definitions have appeared since the judge’s hearing the other day, including the third most popular definition:

Term number 3: FFFFFFFourth of July (expression): Another entry in his year book. Judge Kavanaugh shrugged this off during his hearing as the way one of his classmates would purposefully stammer the f-word – ie fffffffuck you! He indicated he and his friends found it quite witty and the expression caught on.

Lawyer Michael Avenatti, who is representing a Kavanaugh accuser who was at school with him at the same time, tweeted a different definition: “Brett Kavanaugh must also be asked about this entry in his yearbook: ‘FFFFFFFourth of July.’ We believe that this stands for: Find them, French them, Feel them, Finger them, F*ck them, Forget them…”

Here is the link: FFFF

FFFFascinating, isn’t it? I hope this is of some help.