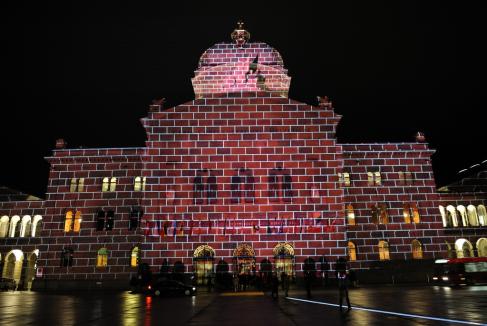 The expert report on the Swiss public debt brake shows the recent issues encountered with this tool. It however does not think that substantial changes are warranted, despite the profound changes in the economic environment.

The experts mandated by the Swiss Federal Council have published a welcomed report on the debt brake that limits the indebtedness of the Swiss Federal government. This tool has substantially lowered the Federal debt since 2005, to a large extent via expenditures that were budgeted but in the end not undertaken. This gap between budgets and effective spending has exceeded 1 billion franc annually since 2005, as shown by the figure below. 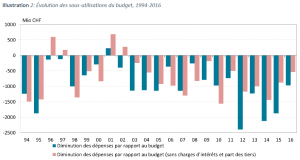 The report points that this gap should be substantially narrowed in the future thanks to a new budgetary planning system. A sizable share of the gap reflects an overestimation of spending in the budget: in a system where obtaining extra funds during the year is quite hard, there is an incentive to build in some margin and budget spending of 100 even if one really plans to spend 98.

One can only welcome more precision in the budget. This said, this precision will highlight the need for a deep debate on the debt. We can illustrate this point by an example where tax receipts amount to 100, planned spending to 100, but effective spending to 98 because of the margin discussed above. Year after year we have a “surprise” of 2 (expenditures that have been budgeted but not undertaken) that is used to repay some debt. As this gap only materializes ex post, there never is a discussion of whether repaying the debt is appropriate.

If forecast are now improved, the spending is now accurately budgeted at 98 and the surplus of 2 is perfectly foreseeable. This clearer planning then calls for a discussion of what to do with the surplus. While the report recognizes that the improvement in the budgetary process will avoid the “surprises” of unrealized spending year after year, it does not stress the ensuing need for use of the surplus.

A large component of the budgetary surprises of recent years stem from an under-estimation of interest payments on the debt and of increases in prices. The report points that nothing is certain and that both interest rates and inflation could increase in the future.

Well, it is true that nothing is certain, but if one waits for certainties, one will never do any planning. In fact, it is quite likely that interest rates will remain low as the Swiss case fits in a deep trend in the world economy since many years that pushes the yields on safe assets down. Inflation in addition remains stubbornly low, and the risk is rather on the downside. This pattern is in fact one of the major topics – if not the most pressing one – in macroeconomic research currently.

A likely scenario of low interest rates and inflation implies that public expenditures could grow at a low pace for quite a few years. It is too bad that the report did not present some projection of expenditures and debt under this scenario and others, which would have been a relatively simple exercise.

The report acknowledges that surpluses could possibly persist, and concludes that it would be better to then lower taxes than increase spending. On this issue, the report is too keen to close the door to higher spending. Of course, it is difficult to discuss such a complex choice in a few pages, but then the report should not have taken such a sharp stance.

The report considers that additional spending would not boost growth by much, except in a case of sizable recession. This is perfectly true, viewing expenditures only through their impact on GDP is too narrow an approach. For instance, additional resources for health care or retirement benefits would generate additional well-being aside from any impact on growth.

Debt can be too low

The report considers the pros and cons of a reduction of debt. It acknowledges that a debt reduction is not necessary a good policy (page 19), but this point is not discussed at length.

It’s too bad, because it is a central issue. With the Swiss Federal debt amounting to a mere 15 percent of GDP, the Federal government would not gain much by paying it down further. As pointed in a recent research by Pr. Bacchetta, the Swiss public debt may well be too low. The recent IMF annalysis of Switzerland raises similar concerns (pages 9-11).

Markets seem to share this view: they are willing to lend to the Swiss Confederation at a yield of only 0.06 percent at a ten year maturity, and even 0.46 percent at a thirty year maturity. In other words, markets are begging Bern not to repay its debt, as they are craving such a riskfree asset. My economists point to the need to pay attention to what markets say. This is a good point, but one should be consistent and listen at all times, not just when interest rates are high.

The report recommendation is to keep the debt brake rule as is. Unfortunately, it does not discuss a simple and relevant alternative, which would be to stabilize debt relative to GDP instead of in absolute terms. As it stands, the debt brake is not adjusted for economic growth, and thus implies that the ratio of debt to GDP will ultimately trend towards zero.

This is not an optimal scenario: from an economic standpoint nothing calls for public debt to fall to zero, to the contrary. A steady debt relative to GDP is not a worse outcome. With the Swiss federal debt now amounting to CHF 99 billion, a growth of nominal GDP of 3 percent would allow for an annual increase of the debt by CHF 3 billions.

The report points that a low debt frees some margin for adjustment in case of bad times. Given the already low level of Swiss public debt, the country already has a substantial margin. In addition, an extra margin would now be of much use in case of major problems, such as bnaking crisis. The low level of Irish sovereign debt before the crisis did not help much once the country was faced with the turmoil of its banking system. The risk of such major event is better handled through financial supervision, through “too big to fail” rules for instance.